On the banner below you will find the current weather right now in Buenos Aires, usually updated on an hourly basis. Importantly, it includes the humidity percentage as well as the temperature, which you should pay attention to in Buenos Aires – it can be a very humid city, which makes it seem a lot hotter and stickier than the temperature suggests on a summer’s day, especially in such a big and busy city.

To get more up to the minute information on the weather in Buenos Aires, including a forecast for the next 5 days, please click on the banner to be taken to the Weather Underground Buenos Aires page.

In general, the climate in Buenos Aires is mild all year round, with no major extremes of temperature or conditions. However, some people may find the summer months too hot and humid (Dec-Feb; average highs of 28C/83F, average lows of 17C/63F), or the winter months a little cold (Jun-Aug; average highs of 15C/59F, average lows of 7C/47F), obviously depending on what kind of weather you are used to at home.

During spring, the wonderful jacaranda trees that are found throughout much of Buenos Aires burst into a striking purple blossom, which ends up carpeting the streets to wonderful effect. It is also a great time to walk around the many lush parks of the Palermo barrio [2], and in other green areas of the city such as Plaza San Martin and Parque Lezama. The porteños (“people of the port”, i.e. citizens of Buenos Aires [3]), relieved that winter is over, are also generally at their happiest during spring, and these are two of many excellent reasons why this is the best time to visit the city. The sky is bright, crisp and blue (like the Argentine Flag [4]), people are already sunbathing in the parks as if summer has arrived, and yes, most people do seem to have a ‘spring’ in their step. Why, in such conditions, it seems like a good idea would be to get out and take one of our Private Walking Tours of Buenos Aires [5]! 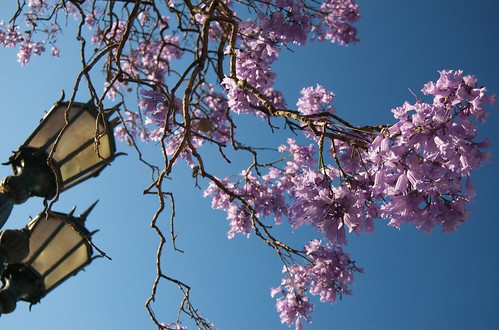 Summer can be overbearing, but less crowded

The summer months can feel overbearingly hot at times, largely because of the lack of a breeze inside the city (despite its name basically meaning “Good Winds”) to relieve the heat and high humidity levels, and therefore many porteños disappear off on holiday to the beaches of either Mar del Plata (on the Atlantic coast of Buenos Aires province, a few hours south of the city) or Punta del Este (north across the river estuary in Uruguay, also on the Atlantic coast, but with slightly warmer waters), usually for the much of the month of January or February. This can make a midsummer visit to Buenos Aires less crowded, which could be of interest to some, if you don’t mind the hotter city weather. 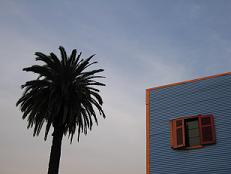 Autumn means the Argentine football (soccer) season is kicking off

During the fall, the new Argentine football (soccer) season starts, so if you are interested in watching a heated Boca Juniors or River Plate game, this is a good time to visit to guarantee that they will be playing. Also, the weather is comparable to spring, even if the people are not quite as happy – which is understandable – they are getting ready for their winter hibernation after all. 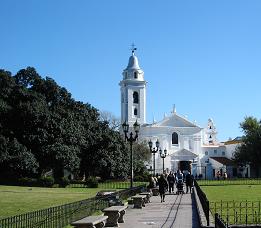 Winter in Buenos Aires is generally fine if you don’t mind a little chill, but come prepared: make sure you pack a coat (or plan on buying one of Argentina’s famous leather coats on arrival), and maybe even a hat and gloves. It is also the perfect time of year to enjoy some Buenos Aires café culture [8], safely warm inside a beautiful old cafe or bar, enjoying your café con leche con medialunas (latte coffee with croissants) or chocolate con churros (thick hot chocolate with long, thin Spanish donuts for dipping) and playing the age-old local game of people watching.

It rains the least in winter here (an average of around 2 inches per month, compared to 4 inches per month in summer, and usually somewhere in between the two during spring and autumn).

In fact, it does not rain much at all year-round in Buenos Aires. Granted, when it does rain, you’ll know about it – sometimes “raining cats and dogs” stuff that turns the streets momentarily into rivers! But the good news is there isn’t much in the way of prolonged rain or continued light drizzle etc here – you get all of your rain in one big storm, usually lasting no more than a few hours, and often shorter. And that’s it – soon the sun will be out again and the blue skies will be back.

To sum up, really any time of the year is good to come to Buenos Aires, in regards to the weather and climate, but as stated above, spring and autumn are probably your best bets.

4 Comments To "What is the weather like in Buenos Aires?"

hey, what about the high humidity here??

Thanks Pattyce, you are of course right, and I have corrected my oversight by including a couple of mentions of the humidity.

Although, considering how cold it is here in the UK right now (I’m on holiday to see the family for Christmas), I wouldn’t mind being in hot & humid BA right now instead!

That’s a nice blog you have too Pattyce, I will read it now and again to practice my Spanish reading a little 🙂

I am looking into honeymoon destinations and everything I have read on your site as well as others is drawing me to Buenos Aires but I have found little information on beaches. Are there beaches close to the area and if so how close? I saw the info on the lakes and Mer del Plato but that’s all I could find.

Buenos Aires is a great honeymoon destination because there are many romantic and interesting sights, hotels, bars and cafes.

However, there are no beaches in the city, or even very near it.

Your best bet is probably Mar del Plata, but even that is at least 5 hours from Buenos Aires City by coach or train. Or you could get a boat and coach across to Uruguay and go to the beach resort of Punta del Este, but again this will take up a lot of time. Both places can be reached by plane from Buenos Aires a lot more quickly, but then this may not be within everyone’s budget.

Also remember that when it is summer in the USA, it is winter in Buenos Aires, and vice versa, when planning your trip.

Wherever you do decide to go, Buenos Aires or not, I hope you have a wonderful honeymoon and a long and happy marriage.

Let me know if you have any more questions here.