You don’t have to be a Catholic to appreciate the beautiful colonial churches of Buenos Aires. God generally inspires some of the best architecture around, and in Buenos Aires it’s no different.

The San Pedro Gonzalez Telmo church is also known as the Nuestra Señora de Belén (Our Lady of Bethelehem) church. A good church can never have too many names.

Some Jesuits named Blanqui, Bautista, Primoli and Schmidt designed the original and kicked off the building in 1734. That makes it one of the oldest churches in the city (but not the oldest, which is the San Ignacio church, just off Plaza de Mayo). The church’s architecture was then added to and restored a fair few times up to the present, which accounts for it’s lovely eclectic style. By the book, its style is ‘neo-colonial,’ but can also be described as ‘fancy iced wedding cake.’ 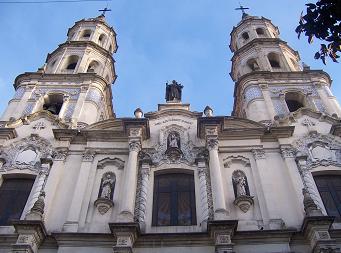 It’s very hard to get a decent picture of the church because the street is of the normal narrow, cobbled San Telmo [1] ilk, and there are large trees getting in on the act – so bring your wide angle camera lens.

Of course, it is a National Historic Monument, which may sound impressive, but is a title that is awarded to almost anything of minor importance here in Buenos Aires.

Up the top of the church, in the center, you can see San Pedro Gonzalez Telmo himself. He was a Spanish Roman Catholic priest, born in Astorga (Spain) in 1190, and devoted his life to enlightening the poor. Old Pedro Telmo may not condone  all the saucy Tango dancing [2] that goes on in his barrio nowadays… however, he is also the patron saint of Spanish sailors, so he may not be so easily shocked.

The inside of the church isn’t all that extravagant compared the the beautifully decorative exterior. It does display some nice oil paintings, your usual pulpit… it is more the quiet and peace that draws passers-by within churches such as this. And that’s not something easily found in Buenos Aires city [3].

Of course, life is not all lovely architecture [4] and peaceful surrounds. On the outside of the church a plaque is found, commemorating the San Telmo locals that died in the terrible yellow fever outbreak of 1871: 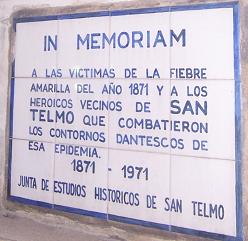 It was that outbreak that also changed the face of Buenos Aires a little. Previously, San Telmo was home to the rich elite of the city. The yellow fever outbreak forced them out of the area, and they found a new home slightly further north, in Recoleta, which remains the home of the extravagantly wealthy to this day. San Telmo turned into an area of fading grandeur that now makes it so attractive to visitors, while in Recoleta [5] the dazzling French architecture that delights tourists in equal measures was erected by the upper classes.

What time are the Masses on Saturday and Sunday? Many thanks for your help