Nightlife under the lights 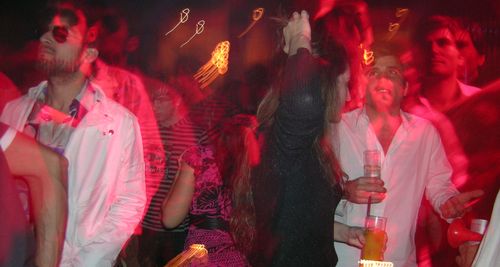 The trademark red lights of Rumi are anything but a sign to stop. And as long as you don’t, you’re in for a good night. Rumi boasts a welcoming and sizable venue for dancing, food, lounging and drinks, and even doubles as a restaurant in the earlier hours (at around 10pm or so).

Rumi is much more of a boliche (nightclub) than a bar or restaurant, but holds on to its desire to be all three just enough. Naturally, like any boliche/bar/restaurant in Buenos Aires, the hour in which you arrive will drastically determine the night you have in store. Because Rumi is the perfect halfway point between the larger clubs like Museum [1] & the once famed Opera Bay, and the smaller boliches (where you find your self fighting for room at the: bar, dance floor, restrooms, entrance, etc…), it’s a great way to enjoy Argentine nightlife [2] without having to embrace the extremes. The red lights of Rumi shine from the outside beckoning patrons to enter…

If you’ve arrived early then you’ve already avoided the fuss of waiting in line and probably sauntered your way right on in. At around 10:30pm the club serves dinner [3]. Rumi is known for its Wednesday night, when for a fixed price you can choose between a choices of entrée, drink and dessert. The menu offers rotating options, but could be something like steak and pasta, both of which are delicious, and your choice of beers, wine or coffee. Afterwards, choosing which ice cream dessert most suits your fancy won’t be an easy feat! 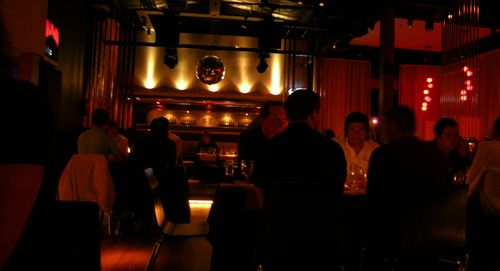 The Early Bird Catches the Booth in Buenos Aires

The restaurant set up is calming and still, and you’ll most likely be set up with a table on the dance floor. Keep in mind you’ll hardly notice that the exact spot you’re eating at will soon transform into a sea of dancers. However, asking politely, calling ahead, or knowing the owner might get you a booth seat located away from the dance floor. This eating scenario is more reminiscent of higher end restaurants and is also a great place to be seated if you plan on staying for the music and dancing.

The booths turn into a wonderful hiatus from the energy of the dance floor and are a perfect place to rest your feet and rejuvenate your spirits. There are seemingly endless benefits to arriving early, and here are just a few: you can see who’s arriving, who’s looking good and if it’s worth hanging around for.

So, You Think You Can Dance?

If you and your amigos have made other plans and have already enjoyed dinner, a siesta and perhaps a drink or two at another bar, then you’re here to dance. Arriving around 2:30am, you’re amongst the fashionable Argentines [4] who are here for fun and to bust some moves. At this point the tables have been cleared, the music is pumping and everyone around you is here for the same reason. All those early birds who aren’t in it for the long haul, have flown the coop.

Rumi has a lovely outside terrace where people enjoy the fresh air and the occasional cigarette. If you want in, you’ll have to wait AND pay your dues. The covers very from weeknight to weekend, coming in a tad steeper on the nights truly dedicated for the night owls. Passing under the red letters of Rumi, yet more red summons you toward the dance floor.

One of Rumi’s greatest perks is the bar [5] and dance floor set up. The bar runs the length of the dance floor so there are no corner bars you need to fight and huddle your way into. The DJ booth is opposite the entrance where the man in charge of the decks quickly changes up synthesized pop hits to pumping techno as he feels out the vibe of the crowd. Those relaxing, watching or simply enjoying from afar seem to melt away, making the dance floor the center of a attention. And why shouldn’t it be? The surging crowd is filled with energy and the club stays this way until the sun comes up, and your priorities switch from boogie to bed [6].

A Word About Nightclub Ambiance

As mentioned, the layout of Rumi does a lot for the club. The bathrooms are upstairs and separate from the club and the hallway leading to the dance floor creates a sort of ‘calm before the storm’. Here you can find couples snuggling and making out in sphere shaped chairs, between bouts of dancing.

Rumi isn’t unaware of its red-light stereotype and hired entertainment is much more “red-light district” than the rest of the club. A feature dancer or two may be propped up for all to see and combing the crowd are other colorful entertainers. It adds a great mix of flavor to the club in the later hours and the crowd digs the extras like glow sticks and candy handed out by the hot-bodied dancers or men in drag. Yet another visual to keep your interest peaked is the footage of live concerts and music videos projected on the screens above the dance floor. You’re sure to draw inspiration from somewhere and I’m sure you’ll enjoy what Rumi is throwing down on the dance floor.

Rumi is located on the Costanera of Buenos Aires [7], but not near Puerto Madero. Instead, look north. It’s much closer to Belgrano and the cab rides are cheap from other eating and nightlife areas such as Recoleta, Palermo [8] or Las Canitas. Mention the club name to a cabbie or scribble down the address and you’ll be there in no time.