British writer and adventurer, meets one Argentine at a time

Rosie Hilder traveled to Bolivia four years ago, ready to start life as an expat. Her experience in La Paz [1] didn’t turn out so well, but – determined to stay in South America – Rosie moved to Buenos Aires instead of going home to England. Since arriving in 2009, Rosie has become an English teacher, journalist, photographer and blogger. 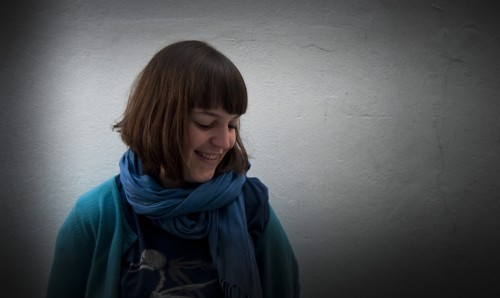 She started her blog, 52exchanges.com [2], in 2011, where she documents a year-long challenge to have 52 (one per week) language exchanges in Buenos Aires. A resident of the barrio of Almagro, Rosie sat down with us recently…

Why did you come to Buenos Aires?
I actually originally moved to Bolivia for an English-teaching job and then when I got there – I really liked it – but after about six months, I realized my bosses were a bit sleazy and didn’t pay me, so I decided to leave, but I wanted to stay in South America, but come somewhere a bit more developed. I had this idea in my head about how great Buenos Aires would be, so I came to Buenos Aires.

Why did you stay?
I really liked it! At first, I had to stay because I couldn’t afford to leave. And then, I got quite a good teaching job, not those sort of normal, flaky institutes. They got me a visa, it’s a job, you know so I decided to stay because of that. And then my ex-boyfriend left, and then, I started to meet at bunch of friends and started to really enjoy the city. And now I have a new Argentine boyfriend! Now I won’t leave because of him.

PG: What about Almagro?
Well it’s a barrio, you know? People actually live there. And there’s like all these specialist shops that I love. And it’s not as fancy as Palermo [4]. And it’s in the middle of everything, you can get anywhere from it.

Where’s the best place you go for coffee, steak or ice cream?
I’m not really big on coffee, but I’ve heard the Full City Coffee House [5], a Colombian one in Chacarita, is supposed to be really good. Steak – well obviously a family asado [6] is the best place to go for beef, but La Cholita [Rodríguez Peña 1165 [7], in Recoleta] is really good. For ice cream, Nonna Bianca [Estados Unidos 425 [8]], it’s in San Telmo. It’s Italian. 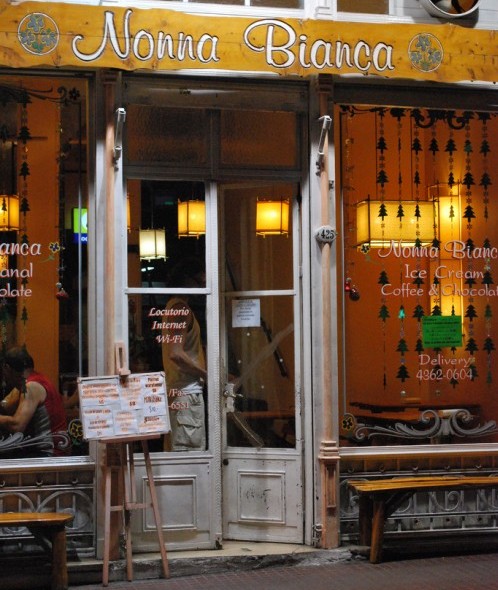 What are your favorite events or festivals in Buenos Aires?
BAFICI, [11] the independent film festival, that’s in April. It’s just a really good chance to see films that you wouldn’t normally see. And after, they often have question and answer session with the director, which I always find really interesting… and people always clap at the end, which is great. We don’t do that in England.

How do you spend your weekends?
Well I’m really busy normally, but a good place to go to relax is the Costanera Sur. I like to go for a walk in the ecological reserve [12] there, or sit in a café with a book. 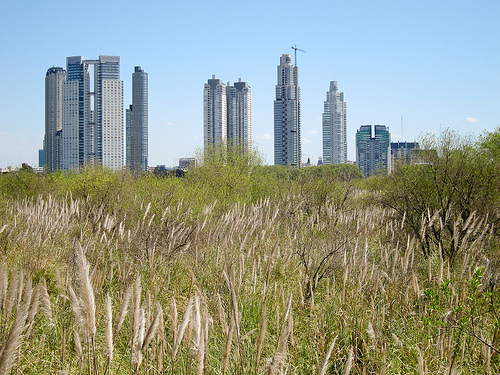 Your last day in Buenos Aires. What are the three things you’d do, or three places you’d go to?
Well, I would definitely go to a park. Maybe the Parque de 3 de Febrero cause just to enjoy the Argentine park experience with mate [14] and family. And that park is really good because there’s loads of stuff there you can take good pictures of. What else would I do? Well I would probably go and eat a steak [15] if it’s my last day. That’s pretty much obligatory, isn’t it? Have wine [16]. And then I would go to my favorite bar, which is Senior Duncan [17] in Almagro.

Is it a British bar?
No, it’s one of these “closed door [18]” bars, and it’s very cool. It’s run by five or six Argentines. It’s one of those places where you can go and make friends with everyone there. They have good music. On Thursdays they have a swing dancing night. And they have a storytelling event [19] there.

So switching gears, 52 exchanges, what prompted the idea and what was that experience like?
I didn’t learn Spanish [20] at all [in school] for seven years. So I thought, “Oh yeah, I’ll go learn Spanish.” I got to Bolivia and realized I’d forgotten the past tense, couldn’t understand anything. I couldn’t get by. And then I sort of got up to scratch in Bolivia with private classes and stuff. And then when I got to Argentina and I didn’t understand everything – [Argentine Spanish [21] is very unique and sometimes difficult to understand] – obviously, because they use the “Sh” sound for the “ll” and all that. And after two years in Argentina, I felt, “Well now I understand and I know to say “sh” and not the traditional Spanish pronunciation  but I still wanted to feel like I completely knew. People at home would say, ‘Are you fluent?’ and I would say, ‘Well… I don’t know.’  What does that mean? Which is a theme in my blog [2] – what does it mean to be fluent? And a friend of mine – someone I know back home – was doing this blog called ’52 free gyms’ or something like that, and he was going to all these free gyms and writing about it. And I was like ‘this is what I should do’ – I’m not really into the gyms but I think it could be even better with people. So, another friend told me she’d been on a conversation exchange, and I put the two ideas together and decided to do a blog about 52 conversation exchanges.

If someone’s reading your blog for the first time, they’re a visitor to Buenos Aires, what lesson do you think they’re coming away with?
Well, they’ll learn some very useful Spanish vocabulary. They’re learning about the city, because I went to different places [for language exchanges] and I said I was in this bar or this place. And they’ll learn about Porteños in general. And I guess for me, the blog is really about cultural differences – the fact that what I say isn’t necessarily the truth. It’s not fact, but it’s the way I see it because I’m English. Things that are normal for Argentines aren’t normal for me. I think that’s the point of the whole thing is trying to get a bit more understanding of the culture, which for me is the most interesting thing about living abroad.

Thank you Rosie! Questions? You can contact Rosie at her personal website: www.rosiehilder.com [22]. And if you are an interesting expat/local in Buenos Aires and would like us to interview you, feel free to get in touch [23] and tell us why.