Rock nacional (literally national rock) is the term used to refer to rock-and-roll music produced by Argentine bands and singers.  Rock is not only popular, but also important to the cultural psyche of the people.  Beloved across generations, the genre incorporates many musical styles, and any Argentine will tell you that theirs was the first rock sung in a language other than English to gain commercial success.

From Elvis to Sandro: Argentina’s early twists with Rock-n-roll 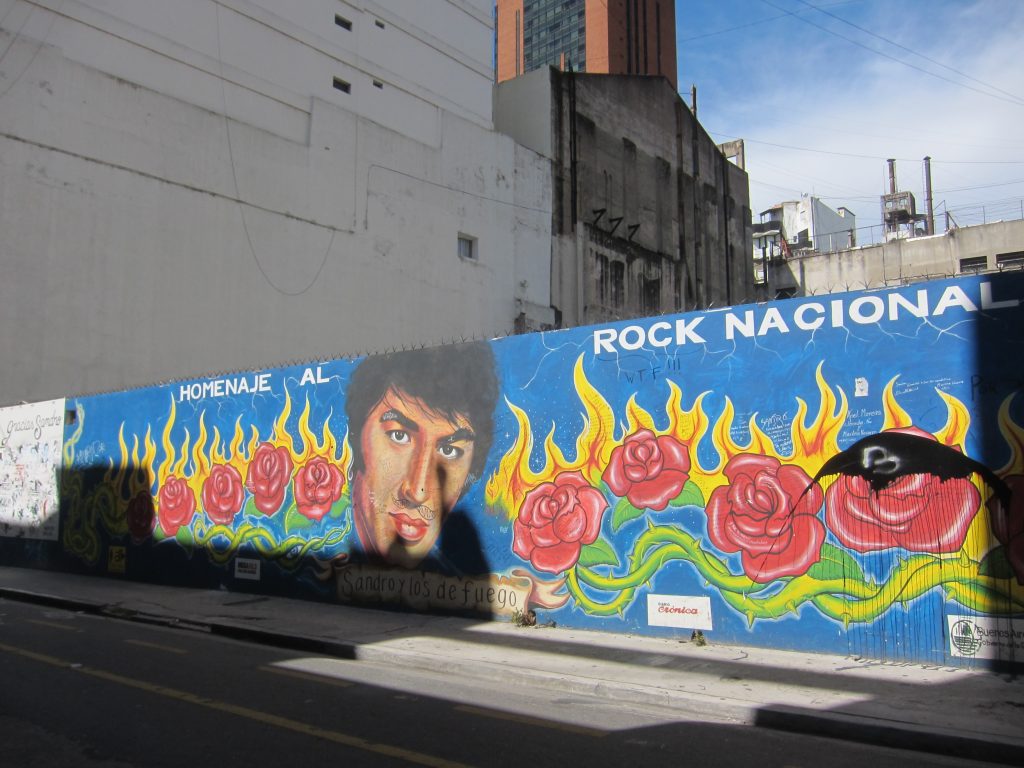 Like in many countries around the world, rock was born when Elvis began shaking his hips!  The music hit Argentina at time of political instability: president Juan Peron [1] had been overthrown, civilian governments were fragile and ever changing, and a military coup overtook the country in 1962.  The Argentine students listening to rock were in the streets, protesting, with rock the soundtrack to youthful defiance.

In Buenos Aires, underground bands played in a bohemian basement bar called La Cueva. After a long, porteño night of rocking, musicians would have breakfast in the nearby cafe La Perla del Once.  One famous rock story is that musicians Tanguito and Lito Nebbia composed the first true Argentine rock song, La balsa [4], in the men’s room of La Perla!  If you’re in the Once neighborhood, La Perla still stands, and is worth visiting.

Groups like Almendra [5] (lead by Luis Alberto Spinetta [6], one of Argentina’s most important rockers), Los Gatos [7], and Manal [8] experimented with sixties rock, and are considered the trilogy of Rock’s forefathers. These founders created a uniquely Argentine sound: an international rock sound, in Spanish, with Argentine musical influences.  The genre branched from this base, and heavy rock bands like Pescado Rabioso [9] (formed by Spinetta after Almendra broke up) and Pappo’s Blues (Pappo of Los Gatos) emerged.  Pappo [10] would later become Argentina’s most important blues musician; he played with BB King in New York, and in true Rock n’ Roll fashion, died in a motorcycle crash in 2005.

Progressive rock made in-ways as acoustic phased out, and the rock scene was just becoming mainstream when the country’s democratic government was toppled by a military junta in 1976.  This dictatorship would become infamous for its violence and repression,  known as the Dirty War [12].  Rock musicians were considered subversive; facing increasing censorship and repression, rock returned underground.  Groups like Patricio Rey y sus Redonditos de Ricota [13] played clandestine shows. Los Redondos wrote songs whose lyrics, while critical and dark, are vague and often rely on metaphor (making them a favorite of Argentine literature teachers).

By the early 1980’s, the conflict between the Argentine junta and the UK over the Malvinas /Falklands Islands was heating up, and the government banned all foreign music from the radio waves.  This left a big void in airtime, and was an opportunity for bands like Los Redondos to explode onto the Argentine consciousness.  Soda Stereo [14], led by rock great Gustavo Cerati [15], emerged.  As opposed to the Redondos’s left-wing, working class lyrics, Soda Stereo played a new wave pop and sung happy and ironic songs. The first band to reach an audience across Latin America, Soda Stereo became beloved across the continent, inspiring an explosion of rock en español (rock in Spanish). Their hit De Musica Ligera still plays in bars from Mexico to Buenos Aires.

In the early 1980’s, Italian-born Luca Prodan moved to Argentina to escape the heroin addiction he’d acquired as a youth in the rock scene in England. He brought with him a post-punk, reggae sound literally unheard of in Argentina, and formed the band Sumo [16]. For an introduction [17] to Argentine rock, this might be the best place to start, not only because the lyrics are mostly in English, but also because their popularity increased after Luca’s death in 1987, and have a substantial influence on current rock. After Luca passed, the bland split into two: Divididos [18] and Las Pelotas.  Below is a photo of Sumo musicians Ricardo Mollo (who would later lead Divididos) and Luca Prodan. 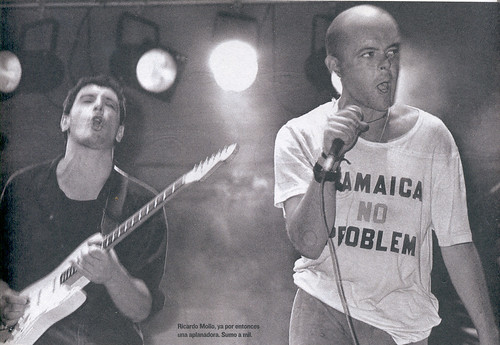 In 1983, the dictatorship was finally over, and with the emergence of democracy came the true explosion of Rock Nacional. Songs which had been repressed were now freely played, and on cassette tapes!  The iconic Argentine band Los Fabulosos Cadillac formed in 1983, and won over Latin American audiences until 2001.  Lead singer Vicentico [21] launched a solo career after the band broke up, and his distinctive vocals still grace the radio waves.

Across the continent, Argentine rock’s popularity took off.  At home, Rock became synonymous with the freedom and celebration of democracy.  Now playing in an open society, rock musicians were free to sing about things beyond repression, like beautiful women, parties, and other rock-n-roll stuff.

This environment lead to a grand proliferation in rock genres.  The 1990’s meant grunge rock, heavy metal, stoner rock, reggae-rock and a whole new “Rollinga” style all gained separate audiences.  (Though the Rolling Stones are beloved in Argentina [22], Rollingas are a distinct phenomenon.  Rollinga fans dance like Jagger, have bangs like Ronnie Wood, and that’s about where the Stones comparison ends; the music is 100% Argentine.)

No better way to get a feel for the contemporary rock scene in Argentina than listening to the flowing bands:

To show what rock fans are like, we’ll leave you with this clip by Argentine comedian Peter Capusotto whose character Pomelo (meaning grapefruit) is an Argentine rock star.  The video is in Spanish, but really all he says is “rrrrock nena” or “rock baby!”

For more information, check out this post on Argentina’s best rock singers [31] on the Expanish blog, which highlights the most important rock figures.  On this Expose Argentina page [32], you can listen to some of the most famous bands. The author has done a great job identifying important bands from different genres.