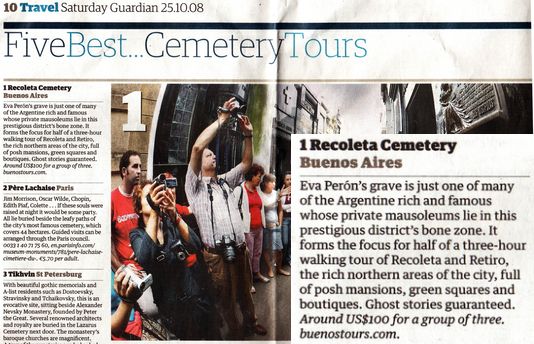 As you might have guessed from the less regular of blog posts around here recently, we’ve been working hard giving lots of walking tours around Buenos Aires. And it’s certainly paying off, with some good press coming in from both traditional and modern publishing formats…

This weekend BuenosTours was recommend by the Guardian newspaper (one of the UK’s most widely read dailies) in their article on The Five Best Cemetery Tours [2], in which they listed BuenosTours and our tour of Recoleta Cemetery (plus surrounding areas) first – I guess making us the best cemetery tour in the world!

If you want to book the “best cemetery tour in the world” with us, click here [3] for more information. The cemetery part of the Recoleta tour is also included in our private day tour of Buenos Aires [4]. 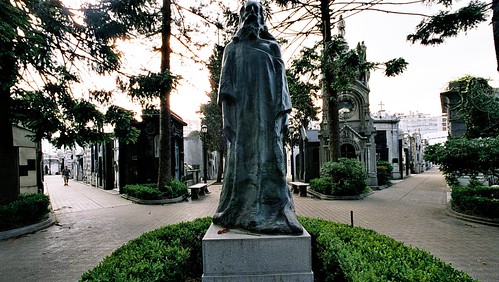 And some Podcasting love too…

But the recommendations don’t stop there. BuenosTours also has fans living in the high-tech age. The podcast guys over at For Whatever Reason [5] yesterday posted up their latest episode, including a long feature on the recent walking tour of Buenos Aires city center they took with us and how much they enjoyed it. Thanks guys! Just to quickly quote a few things they said about the tour in the podcast:

“Most people booked a tour of Buenos Aires, most of them booked a bus tour where they got on a bus and somebody with a loudspeaker talked as they drove through different parts of the city. The tour that we booked was actually a private walking tour and so it was just the tour guide, and me, and Tim… It was wonderful, we had a lot of one-on-one time, or two-on-one time, with him, we could ask questions without feeling like we were interrupting someone else’s tour, we didn’t have other people interrupting what we felt like was our tour, and having been on lots of tour type situations that’s always the case where… you just feel like the experience isn’t what you want it to be, where this was what we wanted it to be, and it was so perfect.”

“It gave us a great sense of comfort to walk around the streets… in fact I stopped him about 10 minutes into the tour and said thank you… because this is the first time I have done any kind of international travel… and you’ve helped me realize that this isn’t any different than home, it’s just a different city.”

You can listen to the episode here: For Whatever Reason on BuenosTours [6] (the part about Buenos Aires and BuenosTours starts at about 16 minutes in).

(And stick around to listen to some more of their stuff, because it’s pretty cool, plus they have great radio voices! Also, check out their Buenos Aires photo album on Flickr [7], with photos from their walking tour, including a couple of rather unfortunate ones of yours truly…)

Finally, you can click here to book the private guided city center walking tour they took! [8]

Now were just waiting on that long-promised Oprah endorsement, and we’re all set… 😉

2 Comments To "Recoleta: Best Cemetery Tour in the World"

Thanks for the kind words, Alan. We loved our time in Buenos Aires and the tour with you was definitely one of the highlights. I can’t stress enough how much Alan helped us feel comfortable walking the streets and soaking in the atmosphere, all while telling us incredible stories. Whenever one of my co-workers is heading to Buenos Aires I tell them to look up Alan first thing!