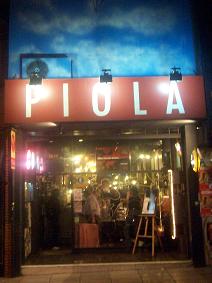 Piola is an international chain of pizzerias, originally hailing from Treviso, Italy, but now with many restaurants in the USA, Mexico, Chile, Brazil and Argentina. However, it seems as they spread far and wide, they didn’t lose much of the supposed stereotypical Italian arrogance on arriving in Buenos Aires. Here’s a little example from the Piola website [1]:

“Piola opened in Argentina in 1993, straight from Treviso, Italy. It revolutionized the Buenos Aires food scene to the point where the local press talks about pre and post Piola eras.“

A little dramatic, yes, but it’s all well and good that they are so sure about the groundbreaking quality of their food. Read on to see if Piola’s claims are strong, or if their exaggerations are nothing more than just that.

The surroundings and atmosphere are certainly not disappointing at Piola – it’s clearly hip, trendy, cool. Based in up-market Recoleta [2], pop-art adorns the walls, the long thin entrance bar is very stylish, there is a lovely little courtyard out the back (see picture below) – perfect for summer evening meals with friends, and of course, many of the thin young waiters and waitresses are as pleasant to look at as the surroundings.

Well, the wait staff had to be hired for something, because they certainly don’t do much waiting. The diners are the ones that have to wait at Piola. Service here can be painfully slow, starting with waiting to be acknowledged when seated, and continuing all the way through the night to the long-awaited arrival of the bill. Even by Buenos Aires standards, service is very slow and impersonal at Piola, so take that into concern when planning the rest of your evening.

The Pizza at Piola 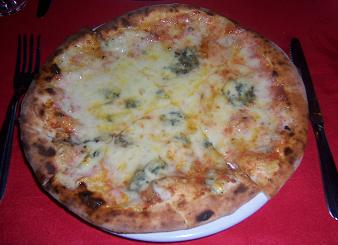 Above is the small Quattro Formaggi, representative of  the pizza at Piola which is, as you would expect, more traditionally Italian than the Argentine versions you get in most pizzerias in Buenos Aires [3] (not that the Argentine versions are bad, try the pizza at Guerrin [4] and Banchero [5] for a more local style). Whereas those Argentine pizza versions are big on mozzarella and fluffy dough, Piola does a more understated Italian style (‘less is more’ for the toppings) that also goes down very nicely indeed.

It is pizza a la piedra, in that it is baked directly on the stone (piedra) floor of the oven (which just about can be seen in the next picture below, behind the chef) and a thin crust version of this style, although it is soft rather than crispy. 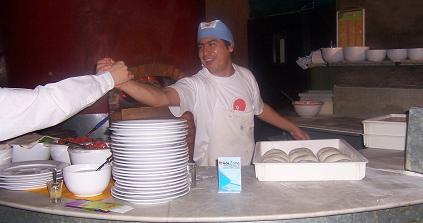 Yes, the pizza is very nice, but it is a little on the caro (expensive) side. A small pizza for one may cost twice as much than many grande (large) pizzas at local spots. Also on the menu are pastas, including a nice but simple affair called Spaghetti Alla Crudaiola (fresh pasta, tomato, buffalo mozzarella, olive oil, basil and parmesan shavings), as well as coffee and desserts – all a bit overpriced. Nevertheless, it must be noted that BA blogger Robert says that the tiramasu at Piola is ‘to die for’ [6] (see the 1st comment of that post, by Robert), so it may be worth a taste.

Hey Alan – Although they aren’t your standard BA pizzeria, they have a lot of options that aren’t available anywhere else. I like that. I’ve never had bad service there (maybe I was too tipsy to notice)… the [9] is great. Maybe it was a bad night for the servers…

And yeah, the tiramisu is good enough just to go for that. If you can’t get to Las Violetas 😉

Thanks for the comment… I agree they have lots of choices at Piola that are not easily found elsewhere in BA, and the food there is generally very good… I guess they were just having a bad night for service when I was there… maybe I should drink more to avoid caring 😉

Next time I go, I will definitely try out the carpaccio rucula pizza and finish with the tiramisu… hope they live up to your recommendation 🙂

[…] Buenos Aires – As most of you know, I’ll go pretty much anywhere to check out pizza. Alan, over at Buenos Aires Argentina Guide wrote up his recent experience at Piola, Libertad 1078, Centro, a chain of a dozen and a half pizzerias in five countries, that, other than slow service and being a bit pricey, he liked quite a bit. Still, that left the pizza itself as worth checking out. He starts off with a quote from their website (which is, perhaps slightly different from exactly what they said on their website, no Alan?). Piola is about twenty years old worldwide, I’m not sure when their branch here opened. The name is street slang for “chill”, or “chill out”… and the quote above sort of fits my thoughts on entering the place. They’re definitely into promotion(s) – both self and other – and they get involved in local community activities wherever they are, at least based on their website, and also offer various types of promotions (they did not, however, invent the idea of giving movie discount tickets in New York… really). […]