The ‘Hipodromo Argentino’ in Palermo

For fans of horse racing, the ‘Hipodromo Argentino’ (Argentina’s Main Racecourse) is definitely worth a visit. If you are here in mid-November, you may even be able to catch the most important event in the racing calendar, the ‘Gran Premio Nacional’, which is sometimes also known as the ‘Argentine Derby.’

You may expect the Hipodromo to be full of annoying, snooty, better-than-you upper class people, but that couldn’t be farther from the truth. Just like race meetings in the UK or US, there is a mix of all types of people there, including many families, enjoying the day out in the sun.

The history of Buenos Aires Hippodrome 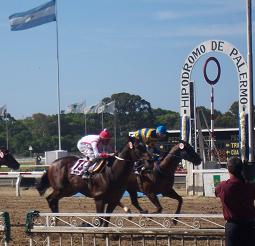 This beautiful race track was inaugurated on 7th May 1876, when a horse called Resbaloso took the honors in the first race, watched by 10 thousand people. These days, in addition to this sport being called ‘Turf’ here in Argentina, almost all of the horses have English names, which means it is often fun to hear the racetrack announcer try and fail with the pronunciation.

The main entrance and stand was built in 1908, with a capacity of 2,000, by a French architect named Faure Dujarric, in the usual lovely Art Nouveau style of that period that is seen all through Buenos Aires, especially in Recoleta [1] and along Avenida de Mayo in the city center.

The Hipodromo has been privately owned since 1992. That probably goes some way towards explaining the over-zealous security guards there who will no doubt harass you not to take pictures. 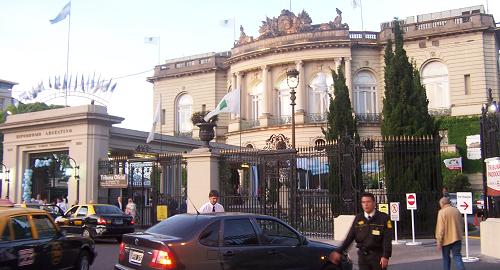 Also inside that building are seemingly miles and miles of underground slot machines. There are in fact more than 2000 of these automated money grabbers – and they are more popular than the horses, in fact that part of the Hipodromo is open 24 hrs a day, 365 days a year. It’s one of those places where can’t tell what time of day it is if you lose track of time, or just lose yourself among the miles of slot machines. There is certainly a lot of money in this building, which again may explain the tight security.

The ‘Gran Premio Nacional’ of Argentina

The Argentine equivalent of the Derby is called the Gran Premio Nacional, running on a chosen Saturday every mid-November. It was first run in 1884. The best horses in Argentina compete in the race, for the honor of being the best in a country that has some excellent horses.

Another nice touch you may get to experience at a historic race such as the Gran Premio is the performance of the national anthem before the main race by the Granaderos, the Argentine horseback regiment formed by General San Martin, who is the main Argentine independence hero.

The Hipodromo – Getting there and getting in

The Hipodromo is not too easily reachable by public transport, but it is definitely doable. You can either get the subway Line D to the Palermo stop, and then walk about 5 blocks along Avenida Intendente Bullrich  (pass ‘Jumbo’ supermarket) until you reach Av. Dorrego, where you will see the Hipodromo across the street and to the left. Or you can get either bus 10, 36, 160 or 166, which all drop you off in that area. But it is probably easiest to get a taxi there and back.

Entrance to the Hipodromo has varying costs, depending on the day you go and the importance of the race. Not very much for what is a very nice, long day out – races usually start around noon and go right the way into the evening. You can check ahead when races are held by calling 4778-2800 (if you speak Spanish) or on www.palermo.com.ar [2] – click ‘Informacion Hipica’ followed by ‘Calendario y Resultados’ for a list of all the race meeting dates, which continue all year round.

Location of the Palermo Hippodrome

[…] After a day at the races, Alan Patrick is inspired to relate the history of the Palermo Hipodromo: “This beautiful race track was inaugurated on 7th May 1876, when a horse called Resbaloso took the honors in the first race, watched by 10 thousand people. These days, in addition to this sport being called ‘Turf’ here in Argentina, almost all of the horses have English names …” David Sasaki […]

It’s funny, I must have gone by this race track a hundred times (you can see it from the train) but I never went to see the races there. Thanks for the heads up, I’ll definitely have to check it out.

No worries Cesar, I hope you enjoy your day at the races 🙂 (And have more luck than I did!)

Alan
I am about to take my first trip on a colectivo tomorrow. Let me know when you want to go the the racetrack.
Ken

I just wanted to say this is a great review of the racetrack. Any chance you might consider reviewing the Argentine Open Polo Tournament this November?

[…] Buenos Aires – It was their first horse race. My friend Barbara called up and asked if I wanted to join her and a couple of friends and spend the afternoon at the races. I’m not clear how it all came about, but apparently, it was the first time in their lives (a local couple in their 60s) they’d been to the track. Now, for most people, in most places, that’s probably not at all unusual. It probably isn’t here either. It’s just that it’s so much easier here. The track is located right in the city, the Hipodromo, in Palermo, the admission fee is a whopping 3 pesos for men, free for women (to help “civilize the atmosphere”), the track has a restaurant, cafe, bleachers, and, of course, horses. You can place bets if you want – a whole peso minimum. Or you can just hang out and soak up the sun and the atmosphere. But they’d never been… it was… “an embarrassment” to be seen at the track. I wasn’t clear how much of it was a social class thing – “only the wealthy or the desperate…” or how much was the being Jewish thing… while not banned by any scriptures, gambling is historically frowned upon. […]

[…] it is close to many of areas of interest including the Japanese Garden, Planetarium, Polo Field, the Palermo Hippodromo , and Las Canitas. As another point of interest, at night or in the early hours of the morning this […]

really useful info – thanks for providing. we have one week left so will have to get down there on monday with our big $1 bets!!

How much does it cost to get from racetrack to BA International Airport?

Hey what times are the actual races sep 3rd?

Thanks for your comment. As far as I can see, there are no races scheduled at the Palermo Hippodrome today, Sunday September 3rd: [8]

Thanks for your comment. During your stays it looks like there will be race meets on Monday 2nd April, Saturday 7th April, Tuesday 1st May and Friday 4th May.

However, to be certain I would recommend checking back to this link in the days before you plan on going: [8]

The races usually happen between around 2pm and 9pm.