Legendary Locro for the May Revolution 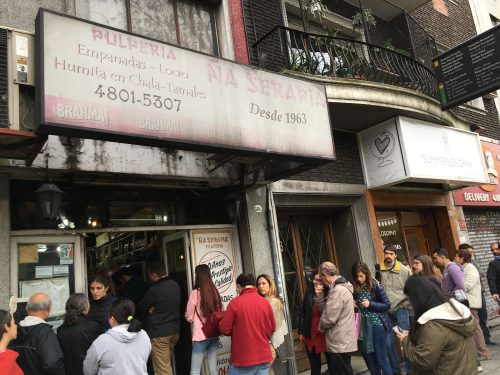 In the heart of Alto Palermo, just in front of where the 41 & 59 buses let off behind the sprawling Parque Las Heras, you will find a curious little hole-in-the-wall with a BIG reputation for serving up authentic regional Northern Argentine cuisine.

A pulperia as its fading, weather-worn storefront sign proudly displays, is the name given to a restaurant that serves the “food of the gauchos” – a classification that is strongly reinforced by the many framed images of this classic Argentine cowboy hanging slightly askew from its walls.

Clearly, this place isn’t going for any interior design awards, but that hasn’t stopped its famed owner Hector from winning the awards that count: the culinary kind.  One look at his front window emblazoned with effusive praise from Guía Oleo [1] (Buenos Aires’ version of Yelp) and TripAdvisor [2] says it all. 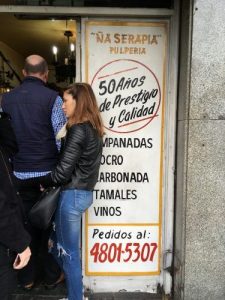 The May Revolution / Locro Connection

The BuenosTours team came here in search of a piping hot bowl of Hector’s lavishly lauded locro – Argentina’s national dish – to celebrate the Día de la Patria, or the anniversary of the May Revolution.  What we found was the faithful reproduction of an indigenous dish that warmed our bellies and spirits on what turned out to be a cold and rainy day in Buenos Aires.  Apropos, since the weather on that fateful day back in 1810 was similarly sopping, but saw a sudden break to sunshine the moment Argentina’s independence was declared from the balcony of the Cabildo.  Legend says that this is why the sun appears on the Argentine flag [3] to this day!

After waiting for 2 hrs+ in a line that spilled out 30 people deep in two directions on the sidewalk (one for eat-in and one for take-out), our crew enjoyed an assortment of not only the luscious locro, but a pile of crispy-on-the-outside, soft-on-the-inside empanadas [4], topped off with the traditional May Revolution dessert of membrillo (quince paste) over a slab of soft white cheese (our sources tell us membrillo was served in little pockets of fried dough by street vendors shortly after independence was declared, which seems as dubious as the sun/flag story, but equally as fun). 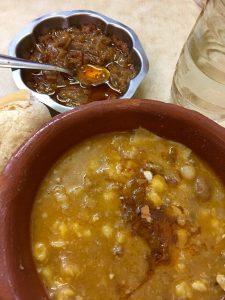 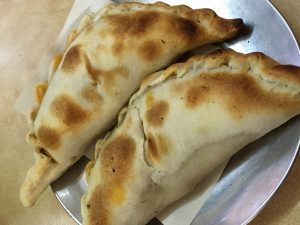 In case you’re wondering how locro came to be forever associated with this national holiday, remember that the transition from Spanish colonial power to the first Argentine self-government (the so-called Primera Junta) was desirous of a symbol of something distinctly local and Latin in origin.  And what better symbol than a tasty dish from the indigenous Cuyo tribe of the Northern Andes?  There are few things more appreciated here than food, and few things more “local” than honoring our South American mainland ancestors. 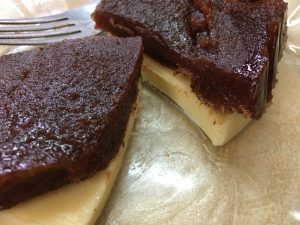 Hector was kind enough to step away from his duties as both primary server and Man of the Hour to grant us a quick interview so we could find out what all the fuss was about.

BT: What province does your menu represent?

Hector: All of the food comes from Salta, in the North.

BT: How did you learn how to cook this regional cuisine?

Hector: I learned from my father in Salta, who always had regional food in the house.  It was nothing more than wanting to continue the culinary traditions that existed in my house when I was growing up.

BT: And what are the typical foods of that region?

Hector: Locro, tamales, and guisos, among others

BT: What is your favorite flavor of empanada that you offer?

Hector: I like the Salteña, which contains spicy beef and potatoes.

BT: How was this restaurant born?

Hector: This restuarant was founded in the year 1963, when I was still just a boy.  I came to work here in 1973, and in the year 2000, the owner of this place didn’t want to keep going, so I took it over with 3 others.  We have continued all the same traditions; we haven’t changed a thing.

Hector: The word Ña is short for doña, which means woman in the local dialect, and Serapia was my mother’s first name. 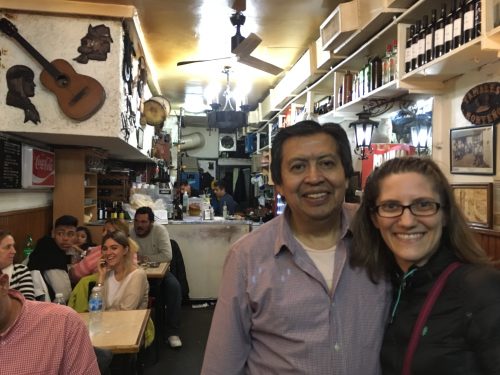 So there you have it, folks.  A hearty thank you to Hector for keeping the delicious culinary traditions of Salta alive, and for gracing us with an unforgettable bowl of chorizo and hominy stew to celebrate this momentous occasion in Argentine history. Best locro in the city?  It’s hard to say without sampling them all, but we’ll let the local patrons – one of whom told us that he has been coming here for over 30 years every May 25th for the locro alone – be the judge!

For more information, check out the Inside Buenos Aires [6] and My Beautiful Air [7] blogs, which both mention our main man above.