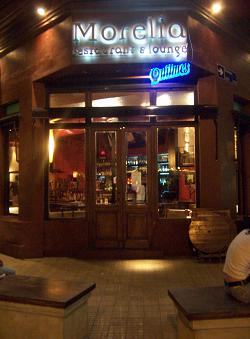 When reviewing [1] the restaurant scene in Buenos Aires, you will certainly happen upon a number of pizza restaurants, and the reason is simple: People here LOVE pizza.

If you do too, then Buenos Aires is a great place to be. Pizzerias like Guerrin in the City Center [2], Banchero in La Boca [3] and Piola in Recoleta [4], and each has all it’s different styles and attractions. However, Morelia Pizzeria of Palermo creates it’s own style and ambiance that adds even more flavor to the already long list of notable Buenos Aires pizzerias.

In short, pizza a la parrilla means pizza cooked on a grill. A parrilla is the traditional Argentine grill that is usually used for cooking basically an entire cow’s worth of meat, either outside at a gathering of family and/or friends, or in one of the many parrilla restaurants that are so common in Buenos Aires and the rest of Argentina. But in this case, at Morelia and other similar pizzerias, it is a wafer-thin pizza crust that is placed on the parrilla/grill, topped, and warmed through in a matter of moments. The technique is explained in this post by Saltshaker [5] (which also happens to include a review of Morelia). Head to Palermo Hollywood to try it out for yourself…

Morelia is apparently a lounge in addition to being a pizza restaurant. This is the kind of thing you come to expect in the ice cool area of Palermo Hollywood, and the lounge part is explained by the addition of a few sofas with coffee tables near the entrance and the slightly lounge bar vibe you get from an occasional in-house DJ. No actual lounge music played though, for the record. Ignore the music, ignore the lounge (whatever that is), most certainly ignore the Palermo Hollywood pretensions, and just head to the back, grab a comfy booth seat if you can, and eat some pizza. That’s why you’re here. 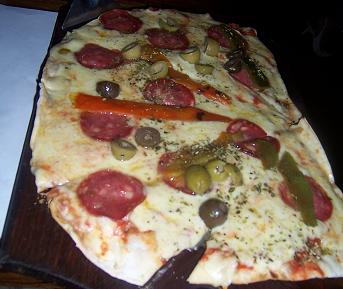 The pizza may seem overwhelming in the previous picture, and in diameter it certainly is, but the thinness of the crust means appearances are a little deceptive. This is actually a Pizza Chica, which is slightly confusing because it is their middle size on the menu (flanked by individual and grande) and meant for 2 people. The toppings? Pictured above is a Calabresa, which in addition to the usual suspects of mozzarella, tomato sauce and green olives, features slices of calabresa sausage (a bit like chorizo [6], only with a faint hint of spiciness) and some strips of red and green peppers. And it goes down like a charm. The pastas are also of top quality, and the melt-in-your-mouth gnocchis are pictured below.

Morelia has two locations in Buenos Aires, with both areas having pretensions of being extremely hip. The Las Cañitas restaurant is the original, and is also a fair amount larger than the Palermo Hollywood one, due to it’s two full floors. However, both the food and the service at the Palermo Hollywood [7] location are generally better. Wherever you go, if you order pizza a la parrilla at least you know you will not have to wait long… it comes lightning fast because the thin crust takes no time at all to cook. And the surroundings in both restaurants have a pleasant, subtle design, providing for a very comfortable meal. 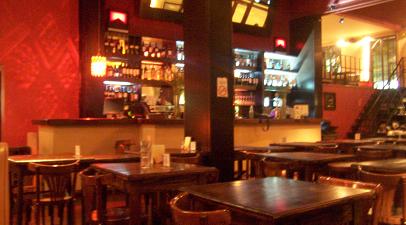 We stayed in Las Canitas on our recent trip to BsAs, and much enjoyed the restaurants there. One of our favorites was the Piegari Piazza restaurant at Chenaut y Baez. The Neopolitan pizza, which had a garlic crust, was very possibly one of the best pizzas we have ever tasted, anywhere. It may not be distinctly Argentinian, but it was distinctly tasty. Try it!

Thanks for the comment, glad you enjoyed the restaurants in Las Canitas, it is a great ‘up and coming’ area of Buenos Aires.

But thanks even more for the pizza tip – I’m adding Piegari Piazza to my long list of restaurants to visit and review. I’ll probably be middle aged and distinctly overweight by the time I get to the end of it. But well-fed all the same 🙂

Alan
Helen and I went to Las Cañitas last night with Tom and Maya. We ate at Las Cholcas. Now that I know how to get there, I’ll give the pizza a try.
Ken

Great review…I went to Morelia in Las Canitas a couple of months ago and was blown away by the 4 cheese pizza (the olives were a beautiful addition as well), and remember being compelled to order it since they used a different set of four cheeses than you typically see in the US, but of course, I can’t remember what they were outside of Gruyere.

Any chance you know what the other three are? My attempt at recreating it here in the states hangs in the balance!

Thanks man and keep up the good work!

I hate myself! Ever since I found that pizza a la parilla was a part of Argentine cuisine (via wikipedia) I was obsessed. However, when I got to Buenos Aires, everybody who I knew claimed it was rarely served and I could not stumble upon a place that served it just while walking. I even went on guia oleo but gave up when I saw the hundreds of pizza places there not knowing which would serve it.

However, once I got back to USA, I just searched pizza a la parrilla on Google looking for recipes, and Morelia came up as one of the first things, a whole entire restaurant devoted to my favorite dish which I never got to experience! Well, I had it once at La Pena del Colorado but well, I could have had it like…everyday. It looks amazing and the price is right so I could have taken my host family there…me molesta