One of the challenges that I face almost daily as a pro photographer is the fact that with the proliferation of cameras, everyone thinks they’re a photographer.

Yet, everyone with a camera thinks they are a photographer.

The majority of cameras — 85% according to some studies — in use today are either camera phones or point-and-shoots.  With some guidance and practice even someone with the most basic point-and-shoot can drastically increase their picture taking skills.

Regardless of the platform, most users fall on a continuum between being a Happy Photographer and a Detailed Planner.

We all know digital camera users that think that taking pictures is switching on the camera, holding it at arms length at the weirdest angle possible and clicking the shutter over and over and over again — hardly giving any thought to where the subject is in the frame.

At the end of the day, these images are just a ferris wheel ride between some great creative shots and the bizarre.

At the other end of the continuum is the Detailed Planner.  We all know photographers like this also.  The person with the camera spends hours — well it feels like it — getting you posed just right and then spends more time staring into their view finder and playing with the controls (if any) to make sure the exposure is perfect.

Once you hear the click of the shutter, you relax and try to move on only to find out that the photographer needs to go through the whole thing again because the sun moved, the reflection changed, someone walked in front of the viewfinder, you closed your eyes or, well, pick any excuse.

So maybe it sounds like I’m making these two types of shooters sound evil.  Truth is, even the best shooters that I know do both at times.

A good shooter has the ability to be spontaneous, experimental and creative yet still take the time to consider the photos that they are shooting BEFORE they go into rapid-fire-sequence.

If you ask yourself just five questions before taking the shot, you’ll find the results are better than what you’ve been getting and you’ll get better shots more consistently than if you just randomly fill your card with images.

• What is the subject of this photo?
• What is the mood of the moment?
• What is going on in the background of this shot?
• Is the place I’m shooting in light or dark?
• Is my subject moving or still?

Asking yourself these questions might seem like it puts the brakes on the creative process.  Well, taking too much time can definitely kill the fun and only you can assess the moment to see which end of the spectrum you need to shoot from.

You can save yourself — and your subjects — some aggravation by anticipating the shot, looking through the viewfinder and snapping the picture.  Don’t over plan.  Be creative. Have fun.

No matter what camera you use to make images, composition is the key that makes or breaks them.  It’s never the camera that makes the image — it’s you.  Or more precisely, it’s your eye.

If you’re like most iPhone/Camera users, you’ve downloaded a bunch of camera apps.  Maybe you delete them quickly or maybe there’s a few still hanging out that you haven’t used in a while.

Done?  Good.  Now we can get on with the serious business of making some great images.

When you’re taking the image, hold the camera up while you keep your arms close to the body.  Holding the camera steady is key regardless of what kind of image maker you have, but it’s more critical with the small format of the iPhone.

Frame the scene in your viewfinder, take a breath and push the shutter.  That’s all there is to it.

Once you get comfortable composing the shot, you will want to take images every day and that’s the best way to learn to pay attention to the settings around you. 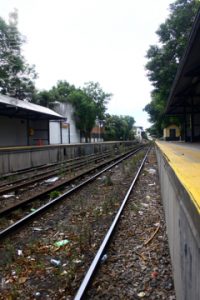 One example of perspective. Notice how the tracks seem to converge in the disance.

Perspective is one of the ways that the eyeball can judge depth within a scene and refers to the angle and location of parallel lines within a scene.

If you’ve ever stood on railroad tracks and  noticed how the rails start getting closer in the distance, you’ve seen perspective.

Another way to think of perspective is the ‘binocular’ effect your vision experiences when you look at a distant object.  Because your eyes are spaced several inches a part, your brain receives two different images that are combined to produce the feeling of depth and perspective.

The change from binocular to monocular can be challenging when someone loses sight in one eye as all depth perception goes out the window and the person needs time to re-learn and readjust.

A point-and-shoot can never ‘learn’ how to see depth; you as the photographer have to give it that ability by using a technique called ‘layering’ to do it.

Layering, like many other things, isn’t difficult once you’ve practiced.

By itself this can get confusing to the viewer of the image though.  Which object is ‘the’ subject of the photograph; the one in the foreground or background?  A technique called “bokah” comes to the rescue. 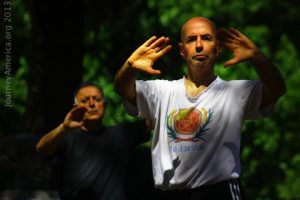 If you’ve seen a photograph where the object in the foreground was in nice, sharp focus while the object(s) in the background were fuzzy and blurred, then you’ve seen bokah at work.

Depending on the make and model of your camera phone or point and shoot you may be able to achieve bokah also.  If you can’t then you’ll have to resort to photo editing through software to accomplish it. 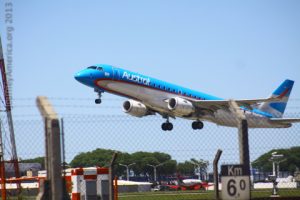 A plane over a busy airport. The story is obvious.

Composing an image through the viewfinder is subjective.  What one person finds pleasing and appealing, someone else won’t like it.

Basically, composition is organizing and arranging the individual details of the scene in front of you into a pleasing arrangement.  While there is no right or wrong composition in photography, a composition that shows what your intended meaning was is affective.  If the image confuses the viewer, then it’s a bad composition.

Rules of Composition are Just Guidelines

You don’t need to think that guidelines of composition are hard-and-fast and the photography police will come take you away if you break them.  The guidelines are just that — guidelines.

Photographic guidelines are valuable.  They are time-tested and have provided great guidelines for shooters regardless of the skill level.

Now, go have fun and make some great images!