The Best Pizza in Buenos Aires? 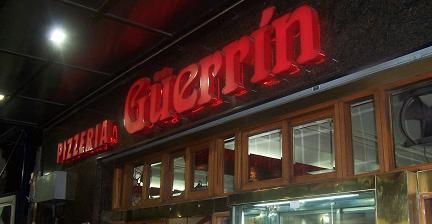 Pizzeria Guerrin is regarded as one of the best traditional Pizzerias in Buenos Aires, and definitely lives up to its reputation. This is a major accolade in a city where Italian food is so popular and widespread, due to the history of Italian immigration that provides the back bone for much of porteño culture. To read a little more about the Italian effect on culture here, check out articles on Banchero Pizzeria [1] and Caminito [2], both in the barrio of La Boca [3], which is traditionally the main Italian community of BA.

But for now it’s all about Guerrin, and its fantastic Pizza, so read on to find out why this restaurant [4] is a must visit if you are ever in Buenos Aires.

Something unique to Buenos Aires is the tradition of eating a slice of faina, which is basically a very thin chickpea-based pizza, on top of a slice of standard pizza, kind of acting as a second crust on the top, making a sandwich of the cheese, sauce and toppings inbetween. At first, this may sound strange, but is in fact quite a logical arrangement…

You see, Pizza in Buenos Aires can be a lovely, sloppy, cheesy affair. Placing the slice of Faina on top, as seen above, helps to neutralize things by acting as a sponge for all of the gooey mess. And it just seems to taste right, somehow. Why didn’t they think of this in Italy?

To make things even more traditional, the pizza and faina should be washed down by a glass of inexpensive moscato; a very sweet, white dessert wine. Porteños have indulged in this eating ritual for years, and again, it just feels like the right thing to do when sitting in a pizzeria on Avenida Corrientes. 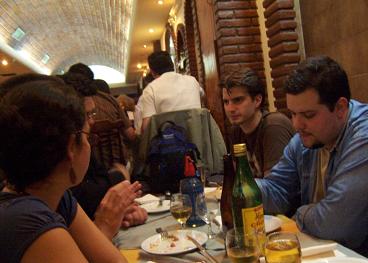 Of course, the tradition would be pretty pointless if the pizza don’t hold up in the quality stakes. Luckily, at Guerrin, it more than delivers: 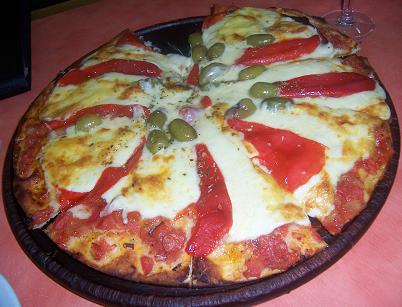 The pizza pictured above is a Pizza Especial Guerrin grande, the house pizza. This is pretty much standard argentine fare for a pizza, with slices of ham and long thin strips of red pepper, in addition to the usual sauce, cheese and olives. Highly recommended, especially when joined by a few slices of faina and washed down with moscato, to really get you into the traditional spirit of things here in Buenos Aires [5].

Hi Alan
If you want to try the -BEST- pizza go to “Pizza Imperio” on the corner of Corrientes and Federico Lacroze (Chacarita neighbourhood) in front of the train station.
The pizzeria you are talking is very good too i admit it.
Saludos!

Thanks Alejandro…Pizza Imperio goes on my ever increasing list of things to do in BA!

However, the “BEST pizza in Buenos Aires” can only ever be an opinion, don’t you think?

I think I only said Guerrin was the best in BA in my opinion, out of the ones I have tried…and so I must try the one you say now to see if I need to revise my opinion! 🙂

The last Time I took a client to Guerrin it was a disaster, I don`t know what happened, but the pizzas was horrible. I haven`t gone since then (2 months ago). Gotta go again.

well, that’s not good news…where did you sit…i’ve heard the pizzas are not so good if you are in the front bar?

i’ve been about 5 or 6 times and the pizzas have always been great, so hopefully your experience was just a one off… 🙁

The problem with proclaiming “best pizza”, of course, is that pizza comes in so many different styles. I do think Guerrin is one of, if not the best of the “a la piedra” thin crust style pizzas… though Tuñin gives them a run for the money… and now I have to check out Imperio as well (want to go together?). But for deep dish, there’s Las Cuartetas (not El Cuartito!), for a la parrilla there’s Morelia or Minna or Mamina… so hard to choose, for completely offbeat there’s DVT…

mmm looks like they load their pizzas up with cheese. Going to add that to my ever growing list too, which is getting to be a bit long.

And do give Tuñin a try 🙂

Looks like I have my Pizza classification wrong a little…to me it was a deep dish at Guerrin, because for me in the UK there were only ever really two types of Pizza – deep dish and thin crust (although since I came to BA I have known and come to love Pizza a la parrilla too).

The Pizza at Guerrin is, to me, thicker than the type of thin crust I am used to…and fluffy in the middle, which in my old classification would put it as deep dish.

But now, having done a little more reading on your blog, Dan, I see that there is ‘al molde’ – baked in a pizza pan and usually thick (which I recognise and remember from La Cuartetas…not El Cuartito, which I agree is not so great…although to be honest I just plain liked the Pizza at Las Cuartetas, it didn’t bowl me over), and ‘a la piedra’ – baked in a stone oven and usually thin to medium, which I guess is what they have at Guerrin (although looking at the photos on their website they do appear to be baking them in a pan shaped thing. Argggh, I’m not sure.)

Anyway, for me, Guerrin is not thin crust, and although crusty on the outside, is thick enough and fluffy enough on the inside to be what I would have called deep dish back in the UK 🙂

Sorry to ramble…I will now change my description in the post above a little.

And of course, I see what you are saying about the best pizza – there are so many types, and it is hard to compare apples with oranges. But still, I have a top three of places I have tried so far, each in a different style…

But I have many places yet to try…

And yes Dan, it would be great to try ‘Imperio’ out together some time…maybe a weekend lunch? (because my day job gets in the way in the week)

Yes, loads of cheese at Guerrin 🙂 Definitely give it a try!

I went to Tuñin once a long time ago…seem to remember liking it, so I guess I should go back for a review sometime…if I must…the things I do for Pizza 😉

By the way, I’m liking the occasional Antares Porter that I buy from Norte every so often now!

Hey, sorry, here I am again; I just need to say to short things:

-Don’t ever, none of you, compare Güerrin to Tuñin: you may end up in the hottest hell.

-If you haven’t already, please go to Güerrin, and have a “silce” (I’m not sure what word to use) at the bar. Yes, standing there, just with a plate, a slice, fork and knife (they even give some water in case you don’t want to’ have enough money to have a soda)
After that, you are, I guess, very much porteño…

What are you, the Pizza police? 😉 I never thought the subject of Pizza would cause so much controversy…!

I’ve been meaning to do that stand up slice eating at Guerrin, but always have gone inside and eaten a whole pizza! Though I’d heard the pizza is not as good quality at the bar? Maybe that’s just a myth…

Anyway, as you say, I need to try it to be a better porteño! 😉

>Don’t ever, none of you, compare Güerrin to Tuñin: you may end up in the hottest hell.

So much fighting over Guerrin, now I really want to try it.

>By the way, I’m liking the occasional Antares Porter

Good stuff, next time I’m up there maybe we can hit the Antares bar. One pint each of their 7 selections will do some good to the ol beer belly.

Without wanting to make you jealous, I was at the Antares bar here in BA the other day, and it’s great 🙂 Now I’m a fan of their Scotch Ale and Honey Beer, as well as the Porter. I have a few others of theirs still to try, so I will be back soon and posting a review…if any beer fans in Buenos Aires read this and want to join me, let me know.

But definitely Mark…would love to have a few pints with you in Antares when you’re next in BA…where exactly are you located “down south” at the moment?

Actually, there is another ‘brewpub’ in BA I really want to try…Cossab in Boedo, which is supposed to have the widest range of beers in the city…has anyone else been there yet?

I like Guinness, but it just doesn’t taste the same to me over here…as 50% Irishman, I believe it is actually a sin to drink the black stuff so far away from St James’ Gate 😉

I’m down in tierra del fuego sipping beers with guanacos and castores.

I really need to get an about page up.

Guys! you may discuss forever wich is the best pizza. But as an argentinian pizza-eater sick male, i have to recommend:

My suggestion: try “el cuartito” pizza, special of the house. It would cost something (i think 39 or 49 pesos( but i am sure you will never taste something like that.
yes, nine portions(yep,nine)in the way to the heavens……

Haven’t tried Guerrin, but I have been to Las Cuartetas, Banchero, and El Palacio de la Pizza.

I put Las Cuartetas at the end of those three. There’s a strange taste that comes with the pizza there that I can’t put my finger on, but I don’t like so much.

A ‘a la molde’ at the Palacio is hard to beat for me. However, I ate at their bar last time and it wasn’t so good. The last time I had Banchero it was absolutely fantastic. So although the Palacio was tops on that list, I’ve dropped down its ranking now to second.

Imperio won my heart. Didn’t like Guerrin that much, nor la Mezzeta.

I lived in Buenos Aires for a month and for this period I visited different pizzerias,( adore pizza and not so much expensive as for a student.) So, I must admit that Guerrin is the winner of all. But there is some little trick. I don’t know why, but pizza is much tastier if you eat it in the first room of Guerrin,not in the second room or first floor.

[…] that awaited us when the tour was scheduled to start at 2PM on a recent afternoon. We started at Pizzeria Guerrin, founded in 1932, which is regarded as one of the best pizzerias in the city (a major accolade […]