*Thanks for visiting BuenosTours! If you find this article useful and it will help save you money for your trip to Buenos Aires, then please consider splashing some of that cash on one of our award-winning private walking tours of Buenos Aires [1], to get even more great advice and start off your stay in BA in the best way possible!*

Be Savvy with Foreign Money in Argentina 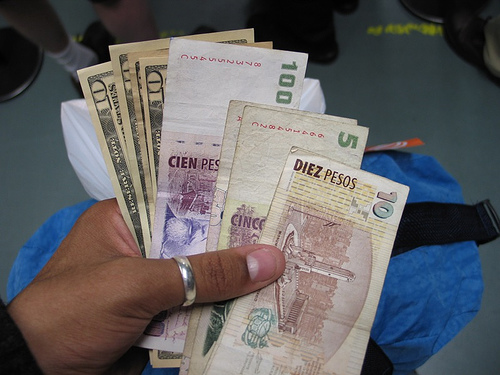 Imagine: your plane finally touches down after a ten hour, cross-continental journey, you wind your way through customs and immigration, and you finally step onto Argentine soil at Ezeiza International Airport [4]. While your initial instinct may be to exchange all of your dollars or euros right then and there, your money may well go further if you don’t (although this being Argentina, the situation is always subject to change!)

What currency should I bring to Argentina?

When traveling to Argentina, bring cash, especially US dollars. It is most cost effective to bring all the money you think you will spend on your trip in US Dollars cash (if possible 100 dollar bills, and if not then 50s and 100s, as lower denominations often get a worse exchange rate in Argentina, as do some older series dollar bills, or ones in bad condition). That might sound a little different to the advice you get in general for traveling, but read this article and you could have a better (or at least, cheaper) trip.

In an attempt to inspire confidence in the Argentine peso and reduce inflation, the government has been known to put limits on the amount of US Dollars (and other foreign currency) that people in Argentina can officially purchase (this policy has changed, disappeared, and re-appeared again since we first wrote this post, but at the time of updating this article in January 2020 there are indeed currency controls in place here).

Since Argentines rely heavily on dollars [5], a parallel, unofficial dollar market exists with a separate rate called the “blue dollar”. To give you an idea of the difference, the official exchange rate at the time of the last edit this article was around 58 pesos to the dollar, while the blue rate was around 74 pesos to one dollar. That would mean you get almost 28% more pesos by changing on the unofficial market, and there is always the chance that the gap between the two will increase again (of course, it could also go down, but it’s more likely it will trend up).

Since the blue dollar rate is higher, your money will go further if you trade it wisely. You can compare current rates by checking the official and “blue” dollar and euro rates here [6]. 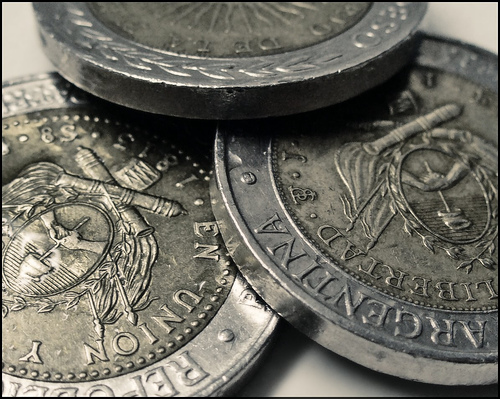 How to get the best rate for your dollars in Argentina?

So now that you’ve made it from the airport into the city (hint: you can pay for your transfer in US Dollars or with a credit card, so you won’t need pesos at that stage), what should you do with those dollar bills? The following are a few ways that people in Argentina get pesos at a better rate than the official rate:

(DISCLAIMER: BuenosTours does not suggest nor condone trading money on the unofficial market, but instead this writer is describing how many people in Argentina do currently obtain pesos at a more favorable exchange rate.) 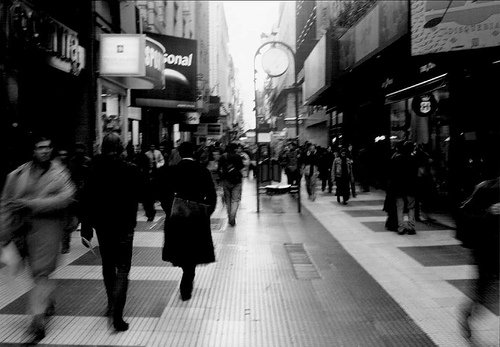 Banks, ATMs, and official money exchange houses are your other options for getting money while in Argentina, but all of these will give you the official exchange rate (and banks and official money exchange houses will also need to see your passport before they change money for you, and in fact many banks these days will only change money for their local clients). You may also be charged high fees every time you use an ATM in Argentina with your foreign card, and the amount of pesos you can take out in each transaction is not all that high, so to get a lot you will need to make several withdrawals, paying the fee each time. It is usually better to pay in places with your card, when you can/when they accept that. But perhaps better to avoid the problem entirely and bring enough US Dollars cash with you in the first place.

Be careful to only exchange or take out the amount of money that you definitely think you will spend in pesos, and keep some dollars on hand to use in restaurants and shops. It can be hard to change pesos back to dollars, and often at an unfavorable rate. And often impossible exchange pesos for any other currency once you leave Argentina. If you do have a receipt from exchanging money at the official rate, hold on to it as you may be able (emphasis on the maybe!) to exchange money back into your home currency with a valid receipt at the Banco de la Nacion in Ezeiza Airport. But probably better just to spend whatever pesos you have left on having a great time in Argentina while you’re still here!