Housed in a lovely Beaux Arts [1] building in downtown Buenos Aires [2], the Galerías Pacífico Shopping Mall is a great place to visit for much more than just shopping. Originally constructed in the 1890’s as the BA headquarters for the Parisian department store, Le Bon Marche [3], this prime spot on the Florida pedestrian street has changed through the years, but retains a nostalgic elegance, making it a dazzling place to shop. 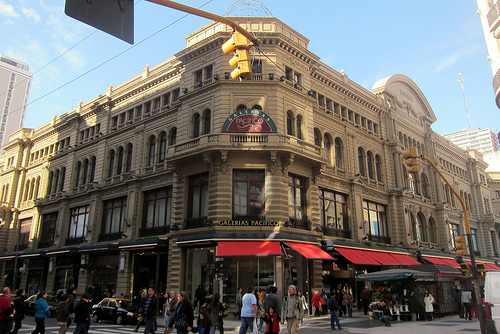 Modeled after the great Italian arcade Gallerias Vittorio Emanuele II [6] in Milan, the building was commissioned exclusively for Le Bon Marche. The department store never occupied the entire building however, as it struggled to compete with the English store Harrods [7] just down the block. (The Harrods building now lays empty, after closing over fourteen years ago.) As a result, other companies and stores occupied parts of the Galerías. It was the first home of the National Museum of Fine Arts [8], a hotel moved into one corner (now the luxurious Esplendor Buenos Aires [9]), and the Buenos Aires and Pacific Railway [10] converted some of the building into offices, thus the Galerías Florida were renamed Galerías Pacífico, since the rail line reached from Buenos Aires, through Chile, to the Pacific Ocean (el pacifico). 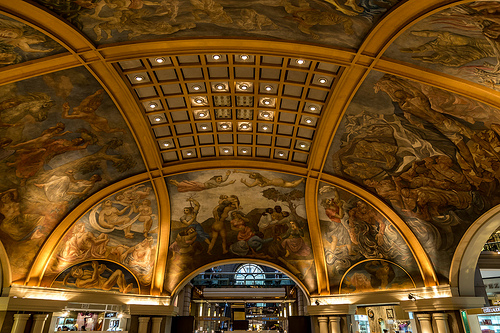 At the nexus of the galleries you’ll find impressive murals painted on the interior dome. Commissioned in 1947, these murals were painted by five of Argentina’s greatest artists at the time: Antonio Berni [13], Juan Carlos Castagnino [14], Manuel Colmeiro Guimaraes, Lino Enea Spilimbergo, and Demetrio Urruchua. The murals reflect universal themes like brotherhood and man’s relationship to nature, and it’s an interesting study in the unique styles of each artist within the same medium. Keep an eye out as you stroll through the rest of the mall for some more contemporary murals, as well.

Like many other beautiful sites in Buenos Aires, the history of the Galerias is tainted with the stain of the last military dictatorship. In the late 1980’s, a film crew ventured into the basements of the mall, and one of the cameramen recognized the the space as the site where he was held and tortured as an ex-desaparecido [15] in 1976.  The basement still bore ghastly evidence of torture, such as markings made by the imprisoned, including dates and pleas for help. The building was declared a National Historic Monument in 1989.

After lying abandoned for a while, the galleries were converted into a shopping mall in the 1990’s, while Argentina was experiencing an economic boom. Today, the stores in Galerias Pacifico are basically the same ones you can find in other malls [16] throughout the city, or walking down Santa Fe avenue, and around Palermo [17]. Foreign brands like Chanel, Tommy Hilfiger, Estee Lauder, and Swarovski have shops among the many Argentine brands, and you can stop for cafe [18] or lunch in the cafes and restaurants both on the bottom floor, and up high under the glass ceiling. Here’s a full listing of stores [19].

For a preview of the Galerias, check out this video [24], and read more on Wander Argentina [25].

Location and hours of the Galerias Pacifico

[…] It is a national historic monument with a a colorful history that can be explored in this article. The stores here are high-end. If you’re not in the mood for dropping a bunch of money, no […]