The world’s most beautiful bookstore, in Buenos Aires!

Buenos Aires is a bookworm’s city: cozy cafes [1] for snuggling up with a novel on every corner, bargain bookshops on Corrientes [2] Avenue, famous literary personalities [3], and high taxes on technology make Kindles and Tablets rare (that’s right, porteños still read real-life, scribble in the margins, flash them on the subway, wallow in the scent of musty spine, thumb the velvety pages BOOKS!). And of course, Buenos Aires is home to the most beautiful bookstore in the world. 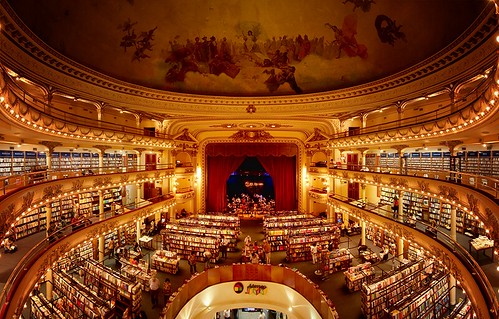 El Ateneo Grand Splendid is one of the biggest bookstores in South America and certainly the most luxurious. Located in the ritzy Recoleta [6] neighborhood, El Ateneo is as splendid as its name, and exudes Buenos Aires’s nostalgic elegance.  The building originally housed the theater Teatro Grand Splendid, designed by architects Pero and Torres Armengol in 1919. After years of popular shows, including performances by the famous tango singers Carlos Gardel [7] and Ignacio Corsini [8], the Grand Splendid was converted into a movie theater in the late ’20’s, featuring some of the first sound movies shown in Argentina.

All the bookstore’s a stage 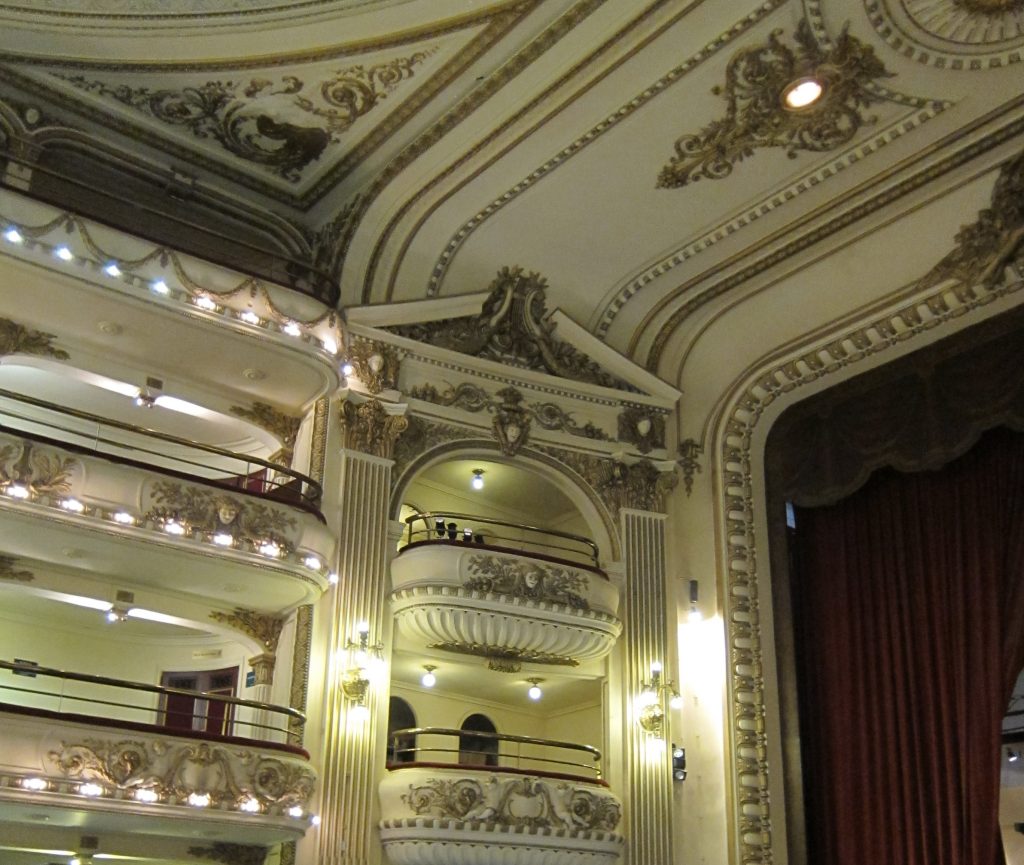 The El Ateneo publishing house converted this old theater into a bookstore in 2000, thankfully conserving its original aspect, but replacing seating with bookshelves. The theater’s spectacular cupola (dome), painted by Italian artist Nazareno Orlandi, depicts an allegory for peace after WWI. Framed by plush crimson curtains, the stage is now a cafe where literary types and people-watchers alike form part of the spectacle; acting like a porteño by sipping a cafe and struggling over a Cortázar [9] story has never been so literal!

Opened in 1912 by Spaniard Pedro Garcia, El Ateneo started out as a publishing house whose initial catalog included The Divine Comedy, Montaigne’s essays, Shakespeare, Ruben Dario, Machiavelli and Homer translated and printed for an Argentine readership. In 1968, the publishers launched “The Spring of Letters”, a series of lectures and signings with famous authors which eventually evolved into the International Book Fair [10] held annually in April. Today, the editorial forms part of Argentina’s most important literary conglomerate with many bookstores throughout BA and the rest of the country.

BYOB: Bring your own book 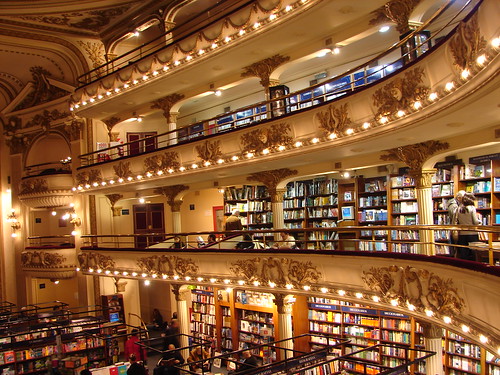 If you want to be one of the 3,000 who visit this glorious temple of books daily, I recommend waiting for a spot in any of the reading nooks housed where the box seats once lay. Snuggle up with your selections, admire the ornate views, and watch people from all over the world snap photos and delve into texts.

Don’t be disappointed by the English book section, though; it contains almost exclusively romance and mystery novels with an occasional classic. There are, however, many books on Latin American art, regional cuisine, guide books, and Argentine culture which make for fun browsing for even those who don’t understand a lick of español [13]. Check the basement for music, DVDs, and an extensive children’s section, and the upper floors for great views. The first floor houses mostly medical, psychological, and education texts, and you can find Classical and Opera music on the third floor. 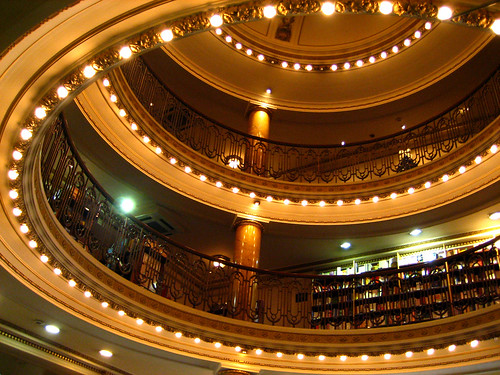 Don’t believe it’s the most beautiful bookstore in the world? Neither did The Guardian; in this article [15] they placed El Ateneo at second. Call me dramatic, but I hold to my claim that El Ateneo is number 1! For a great description of the store, try Atlas Obscuro [16], and if you want to see some more magical bookstores check out this top twenty list at Flavorwire [17]. Or just sit here and watch the following short video on El Ateneo instead:

What a great description of this beautiful house of letters. I was there once but did not know all that it held or the history. Now I would like to return and explore all the floors more carefully.

Thanks Annie! You’ll have to come back and spend an afternoon perusing the stacks!

My question is, if you have any books or articles with pictures of an old Cafe,
“C A F E E S T A N I O.”
It has been said that young Aristotle Onassis worked there once when in 1923
arrived as a refugee from Smyrna to Buenos Aires. It has also been said that
Onassis served coffee to Carlos Gardel and afterwards young Onassis kept the empty cup.
Hopefully you have something in English.
With many thanks and best regards,
sotos

My husband and I visited El Ateneo Grand Splendid in March this year and we were absolutely marveled by it. To have a souvenir from our beautiful visit, we purchased a CD with the most representative tangos, “Tangos among friends” with the famous “Mi Buenos Aires querido” We were looking so much forward to listen to the tangos upon our return. Unfortunately, we were able to enjoy the CD as is it damaged. The CD was sealed and its original box in intact. Of course we can not find a similar CD in Toronto, Canada where I live.
Could someone direct me to Ateneo customer service, so we can try to resolve this unfortunate problem. On the bookstore website, I can not find any email address, just the telephone number…
Many thanks in advance!
Lidia

I’m sorry to hear about the damaged CD. I had a look for an email contact for El Ateneo but unfortunately can’t find one anywhere. I would suggest giving them a call on the number listed on their website and asking if anyone there speaks English – it is quite likely that someone will.

[…] to this incredible theatre turned bookstore to just hang in the little cafe and peruse the many, many books. Or go the extra mile and set up a […]

[…] 3] El Ateneo in Buenos Aires, Argentina is one of the most epic bookstores I have ever seen. Once a former theater, the bookstore boasts over a million people walk through its doors annually, and it isn’t difficult to see why. [21] […]

[…] Wednesday will be a day of recovery and looking around. Thursday afternoon I’ll be doing some press interviews at El Ateneo, one of the most gorgeous bookstores in the world. […]

[…] to mention El Ateneo Bookstore, a 100-year-old theatre that was converted to one of the most beautiful book stores in the world. […]

[…] to this incredible theatre turned bookstore to just hang in the little cafe and peruse the many, many books. Or go the extra mile and set up a […]

[…] Not taken a library, but rather a bookshop, this grand building Buenos Aires had to make the list. Originally a performing-arts venue when it opened in 1919, it is now one of the largest book stockists in South America. When it was converted into a book store, the theatre seats were removed and replaced with shelving for the collection and now you can browse the store, find a snug corner to read in or if you are lucky, you can enjoy the live piano music when being played. More info. […]

Beautiful Place of Argentina, they have made an excellent description of it.

I hope to visit the Ateneo really soon, thanks for your article, i love BookStore