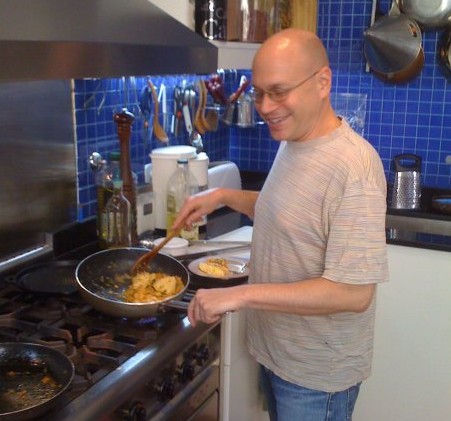 Originally from Michigan in the United States, Dan Perlman lived in New York City for 23 years before moving to Buenos Aires in 2005.  He is a  trained chef, pastry chef and sommelier and has written several books [1] about food and wine.  The author of the SaltShaker blog [2] and chef at Casa SaltShaker [3], his ‘closed door restaurant’ (a restaurant in a private home that is by reservation only),  he lives in the Recoleta [4] neighborhood of Buenos Aires. And yes, he’s the second subject (and second Dan [5]!) of our series of BuenosTours interviews with interesting expats & locals.

When did you first come to Buenos Aires?
In 2005. It was not my planned vacation. I was supposed to go on a two week culinary tour in the Benelux countries but the tour operator cancelled on about a 3 days notice. With time off from work already planned, I scrambled to find a cheap and quick alternative. A friend suggested Argentina, given the economy then.

Why did you stay?
I didn’t stay that time, but I did like the city a lot and met Henry, who was working at the B&B where I stayed. We kept in touch and a couple of months later I decided to come back and explore more of the country. Henry and I became “an item” and my stay turned into a longer stretch. After about six months I decided to move down here.

On a typical day, what is your routine?
I don’t sleep much, so I’m up by 8am. I usually start the day with a large mug of black coffee and checking the usual nonsense on the internet, answering e-mails, and, a couple of days a week, writing a blog post. If our restaurant, Casa SaltShaker [6], is open I head out to the markets to do my last minute shopping, then come back and start preparing. That pretty much ties up my day until late afternoon at which point I take a break and then dive back into dinner service, usually finishing up around 1 am. If the restaurant isn’t open I often hang out with friends or check out a new restaurant for lunch, or, I stay in and experiment with new recipe ideas. Maybe once a week we go out to dinner.

What is your exercise routine?
I manage to drag myself to the gym a couple of times a week. I’ve been studying and practicing martial arts for years and so I continue that on my own here (there is no kenpo school here in BA) and even teach a little bit of it. And, I supplement that with some Tai Chi, now and again.

What is your favourite way to spend a Sunday in Buenos Aires?
Relaxing. Brunch with friends, reading or playing online games. I’m a big dungeons & dragons geek.

What is your favourite neighbourhood restaurant?
In my neighborhood Recoleta, it’s Tarquino [7] (Rodríguez Peña 1967) – very creative Argentine cooking. And best when someone is treating us to dinner there as it’s kind of a budget stretcher. A neighborhood style restaurant [8], i.e. something casual and comfortable – Las Pizarras [9] in Palermo (Thames 2296). Again, really creative Argentine cooking, but at a much easier on the wallet price.

What are your favourite festivals / events in Buenos Aires?
Last year I had great fun at the Peruvian Gastronomy festival along Avenida de Mayo – hopefully they’ll repeat that one! 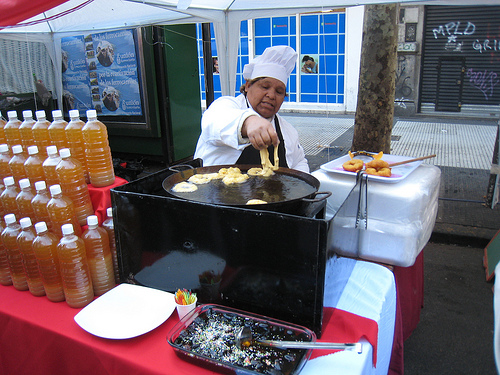 You are a trained sommelier, what are your favourite Argentinian wines?
My favorite Malbec is the Villa de Acequias “Viña Rosedal” from Luis Segundo Correas [12]. I love the Semillon “Tomero” from Carlos Pulenta [13]. Recently I’ve really become enamored with the Red and White Blends from the Nicasia Vineyard of Catena Zapata [14], particularly the Cabernet Franc base on the red side and the Viognier base on the white.

What have been some of the best things to have happened at your closed door restaurant, Casa Saltshaker?
My favorite story happened early on. Two couples, in their late 50s, from the midwest U.S. arrived, separately. The man from one couple and woman from the other kept looking at each other, puzzled. They got to talking and realized that they’d been high school sweethearts and hadn’t seen each other since graduation day – he’d gone into the army and by the time he came back she’d moved away. The two couples ended up spending the rest of their vacation together.

Any fights?
We’ve never had any real serious fights – we’ve had some political arguments and we had a couple break up their engagement at the table, in front of their respective parents, but it turned out they’d staged it. We once had two people who’d had a bad business deal years before happen to end up at the table together, both guests of a mutual acquaintance – one of them fumed a lot, the other just ignored him.

Who have been the most interesting guests at Casa Saltshaker? Anybody famous?
Oh my, I’m not sure I could get into that. We’ve certainly had some local television and stage folk come, and a couple of local polo players.

Where is this best place to get empanadas in Buenos Aires?
I think my favorites, at least in this neighborhood, are from La Cocina (Pueyrredón 1508), where they have Catamarqueña style empanadas [15]. 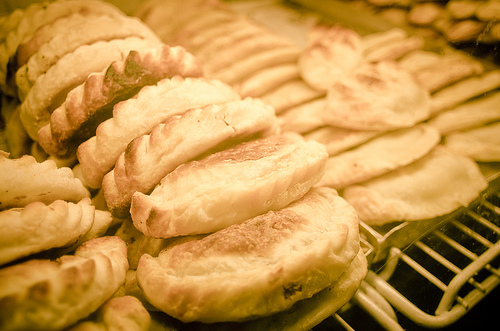 What are your favourite food stores?
I love shopping in Barrio Chino (China Town) in Belgrano [17], and usually go to the “original” store along Arribeños.

Where is the best place to get coffee / steak / ice cream in Buenos Aires?
Coffee, that’s easy, Est. General de Café [18] (various locations), there’s no better coffee in the city that I’ve found. I don’t know about the best steak, but the best steakhouse experience for me is Don Julio (Guatemala 4691, Palermo) – between ambiance, food and wine list, it’s a winner. Scannapieco [19] was my favorite ice cream place when it was on Avenida Córdoba, and they have recently reopened by the Mercado de Pulgas on Alvarez Thomas 14 (and Dorrego) in Colegiales.

Where do you go for a romantic night out in Buenos Aires?
Pura Tierra [20] (3 de Febrero 1167, Belgrano [17]). It’s our “go to” place for our anniversary and occasionally other life events. Romantic ambiance, fantastic food, great service.

Do you have any collections?
Stories and egg-cups (pictured below). What are your favourite websites and blogs?
There are a few food blogs I read all the time – from Yotam Ottolenghi [21] in London, the Baker’s Banter blog from King Arthur Flour [22], Ideas in Food [23] for things that in general I will never, ever do with ingredients. Outside of the food world I’m a big fan of the Strange Maps blog [24], Letters of Note [25], and I usually check in on the latest videos on both FORA TV [26] and TED [27] once a week just to see what’s new and interesting.

What do you never leave the house without?
My keys. Really, that’s about it. I’m not someone who feels the need to be in constant contact and often don’t even bother to take my cellphone with me. I usually, though not always, have a camera with me.

What is the most unusual thing you have been asked by a stranger in Buenos Aires?
I was standing at the corner of Pueyrredón and Las Heras and a couple asked me where Retiro [28] station was. On the surface it seems an ordinary enough request, except that they were holding their tablet computer up with an interactive map that showed the station situated right there at the corner. They were a little miffed that they had about a 2km walk ahead of them. 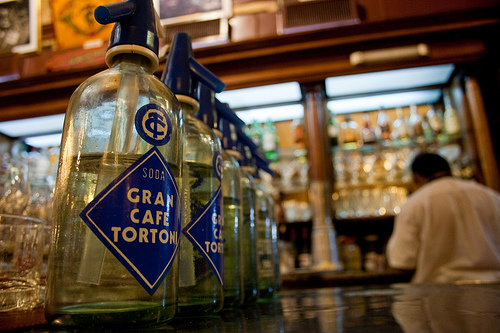 What are the best souvenirs or gifts to bring home from Buenos Aires?
Wine and leather goods.

Any insider tips?
Use xoom.com [36] for money tranfers (for people with a US bank account). Don’t complain that taxi drivers and kiosks won’t take 100 peso notes. Just because you’re on vacation doesn’t mean you get to behave like an ass because you don’t think you’ll ever see these people again. Don’t eat steak [37] every single meal, there’s plenty of other food available here. On the flip side, did you really come all the way to BA just to eat sushi with cream cheese or a plate of spaghetti with bolognese sauce? Don’t use Google maps here and expect to end up where you want to be.

Thank you Dan! If you are an interesting expat/local in Buenos Aires and would like us to interview you, feel free to get in touch [38] and tell us why.