An intimate dinner party in the chef’s own home 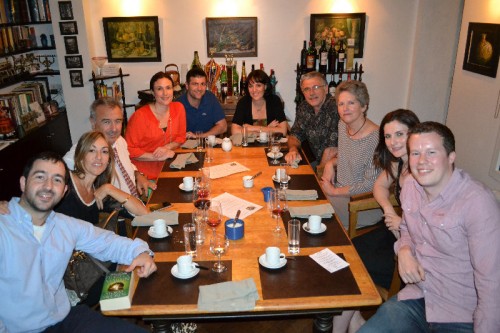 There is something slightly surreal about attending an intimate dinner party in a private home at which the ten guests are total strangers and the host is mostly a background presence, periodically emerging from the kitchen to introduce the dishes and wines before hurrying back to prepare the next course. With diners from Argentina, the United States, Ireland and England, the language at the table switched between English and Spanish [1] and the conversation topics spanned the globe. By all accounts a fairly typical night at Dan Perlman [2]’s ‘closed door’ (‘puertas cerradas’) restaurant Casa SaltShaker in his apartment in the Recoleta [3] neighborhood of Buenos Aires.

From the outset, eating at Casa SaltShaker is unlike going to a normal restaurant [4]. Dinner places are by reservation only and the address is only revealed once the booking has been confirmed. Guests are warned to inform Perlman in advance of any allergies or dietary requirements, leaving him free to dream up the dishes on the five course set menu, which are usually created on a whim. As Perlman explained, he rarely serves the same dish twice.

Arriving at the apartment block shortly before 9pm (guests are asked to arrive between 8.45pm and 9pm; dinner is served at 9.15pm), I was unsure what to expect. As I rang the doorbell, I wondered what language I should speak. I was greeted by Perlman’s partner Henry, who I followed into the apartment, a bright, modern and homely ground floor duplex with shelves stacked full of cookbooks, paintings and family photographs on the walls, low lighting and an outside patio. Elton John [5] was playing in the background. As I was the last to arrive, I could see the other nine guests standing together in a circle in the living room talking. I was handed a ginger, Pineral [6] (an Argentine aperitif) and pink grapefruit juice cocktail and I went over to introduce myself to the group.

Among my dining companions were a couple from Ireland, a Rosarian couple who were in Buenos Aires to visit their son, who was also at the dinner, and a couple from Oregon and their parents / in-laws. We all sat together at a large square table, set with neatly folded napkins, place mats and a promising selection of several different glasses – Perlman is a trained sommelier [7] and each of the five courses was paired with a glass of specially selected wine [8].

The printed menu awaiting us at the table informed us that the first course would be ‘salatit banjan y satata banadoura’. This turned out to be two Middle Eastern style salads, one with tomato, red onions, chili and prawns and the other with aubergine, green pepper, lemon juice and cockles, served on a camembert cheese tuile. The unusual combination seems typical of Perlman’s idiosyncratic cooking style and is certainly not the usual Buenos Aires fare. The Nieto-Senetiner Brut Nature [9] champagne we drank with it was even better.

Next up was a truly delicious cheddar and English ale soup served with homemade bread, my favourite dish of the night (how I would love a bowl of it now). Perlman explained that he usually puts a soup of some kind on the menu, since good soup can be hard to come by in Buenos Aires. This one was paired with a Terrazas [11] Chardonnay Reserva. 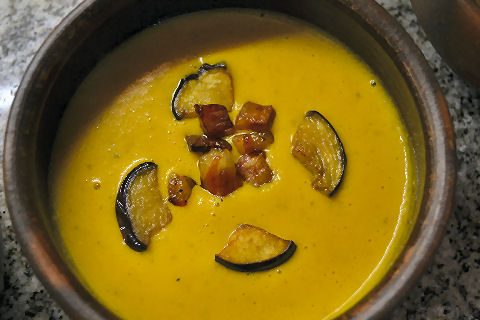 The course that seemed to be the most popular of all, however, was the one that followed: freshly made pappadelle pasta with peppers, butter beans, walnuts, lemon zest, garlic, rosemary and olive oil, washed down with a Escorihuela Gascon [12] Rosado. 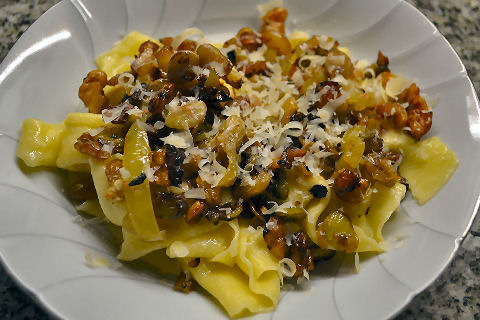 Then came the maincourse, seabass wrapped in Serrano ham with potato risotto, portobello mushrooms with ‘mustard caviar’ (mustard seeds that are inflated like popcorn). In a city where there is generally a huge chunk of meat at the center of every evening meal, it was a welcome change to eat fish, which was succulent and served with a Malbec [13] reduction sauce.

Although I am not generally keen on deserts, I really enjoyed the slightly unusual passion fruit cheesecake with a coconut crust. It was not too sweet (perhaps why I liked it so much), although it was served with an incongruous dollop of dulce de leche. As we lingered around the table chatting I felt so relaxed I hardly wanted to leave. Luckily Henry came round with a large cafetiere of strong black coffee [14] to give us the boost we needed to head out into the night, full and content. 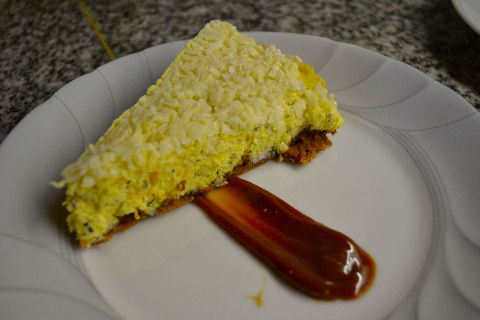 If you would like to have dinner at Casa Saltshaker, it is necessary to book in advance. For more details on how to make a reservation see the Casa SaltShaker website [15].

For more about Casa SaltShaker and other ‘closed door’ resaturants in Buenos Aires see this post [16] in the Argentina Intependent, and A Life Worth Eating [17]‘s write-up.