Abandoned buildings in Buenos Aires, and the past stories they hold

Jeff Barry, over at  Buenos Aires, City of Faded Elegance [1], has started what should be a very interesting series of posts about deteriorating and abandoned buildings in Buenos Aires.

He started the series with a post about an abandoned building on calle Bolivar in the barrio of Barracas [2], and tells an interesting story about the lives that would have once been led in crumbling buildings like these. It really is this type of deteriorating building and the stories within that gives a city like Buenos Aires authenticity and an interesting edge – we would be far worse off without these reminders of days gone by.

Jeff then invited other bloggers to join in the series by posting their own pictures of abandoned or deteriorating buildings in Buenos Aires, or indeed anywhere else. Tango Cherie [3] has posted her own thoughts on run-down buildings in Havana, Cuba [4], that are in fact still very much lived in, despite their state of disrepair.

Joining in with the series, so here is a new photo entry: 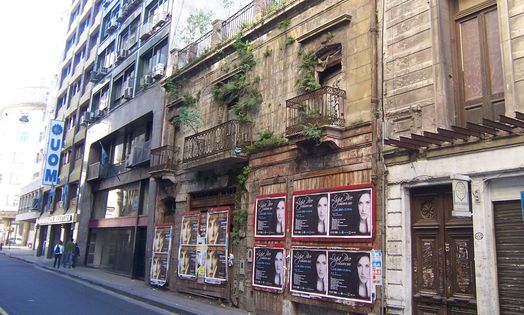 This building is found on the 400 block of Alsina, just across the street from a favorite old cafes in Buenos Aires, La Puerto Rico (great coffee and pastries). It is also just a block away from Plaza de Mayo, so you would imagine it would be a prime location. However, despite that, it has been in more or less the same horrible condition over the past few years, the only changes being the extra foliage growing on its walls, the changing state of its crumbling old facade, and the different fly posters that adorn its boardings each week.

Some similar buildings further down the block (on the corner opposite the lovely old Farmacia de La Estrella and above that the Buenos Aires city museum) have a sign on them indicating that the Buenos Aires city government is planning to renovate them and create shop space on the ground floors – however it seems that the separate building shown in my photo might be ignored for a while yet. We’ll see…

***As of November 2009, this building’s facade HAS IN FACT BEEN RENOVATED by the Buenos Aires city goverment!***

3 Comments To "Buenos Aires – The City that Fades Away"

Hi Alan – thanks for joining the series! I’ve added a link to this post from my page.

It’s amazing how something like this building on Alsina is still in that condition considering the location.

No problem Jeff, glad to be part of the series.

Maybe some other BA bloggers reading will also join in? 🙂