For those that have a penchant for the history of this great city, Google [1] has recently announced that the latest release of their ‘Google Earth’ maps program has gone ‘4D’, by adding an interesting choice of new dimension – the past, as noted here in Spanish [2], and here in English [3]. They have done so by adding old maps of certain cities as ‘layers’ over the satellite maps of the earth, so that you can compare past and present.

Luckily enough, Buenos Aires, Argentina [4] is one of the historical maps included, with a version from 1892 being viewable over the current real-life BA: Check it out by downloading the latest (free) version of Google Earth [5] and installing it. To use this cool feature, go to the Layers panel on the bottom left, expand ‘Featured Content’, and then ‘Rumsey Historical Maps’, and select ‘Buenos Aires 1892’, to see how much the city of Buenos Aires has grown since 1892 – look at all that green space! 🙂

Fans of the history of Buenos Aires would do well to also check out Buenos Aires expat blogger Robert Wright’s excellent website, Line of Sight [6]. 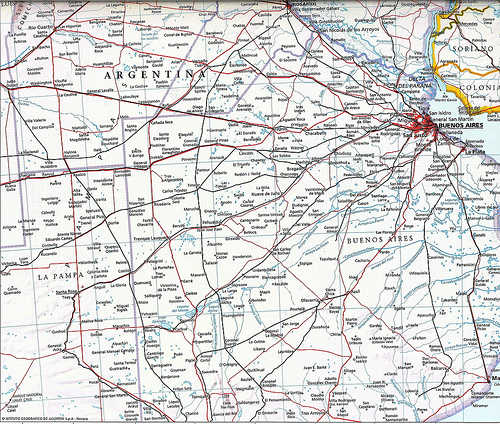 wow, that is very cool!!! I`ll take a look at it right now.
And I went to Volta, you were right, it`s an amazing ice cream

Glad you liked the ice cream, Diva. Actually, I was at Volta last night. I can’t stay away from their ice cream for too long.

[…] Alan Patrick notes that Google Earth has added a fourth dimension and gives a hyperlinked overview of the then-and-now of Buenos Aires. For those still caught in a 3D world, you can still download Ezequiel Galotti’s 3D Google Earth portrayals of Buenos Aires and Mar del Plata. David Sasaki […]