Apparently, Kings in Buenos Aires travel by bus. And it’s a bargain too…at just 2 pesso 70 centavos (about 25 US cents) for most journeys within the city (although some shorter journeys should cost 2.50 and other longer ones 2.85, and if you pay in cash it can be up to 5.00).

In today’s economy, even a King has to be prudent with his savings.

(See the comments after this post for further explanation of the camels quote. Thanks Nico!) 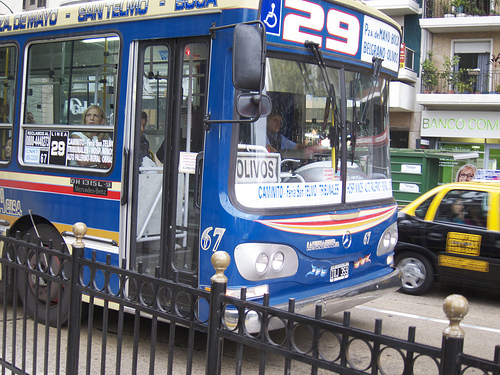 In many ways, colectivos [3] really are the travel choice of Kings in Buenos Aires. There are so many routes, that almost all run with amazing frequency and regularity, even right through the night. Certainly beats the somewhat limited subte (subway) system here in BA, especially in the hot and sticky summer months. And it always beats taxis on value.

So, here is some advice on how to catch a bus in Buenos Aires… a task that may seem simple, but is not as easy as it sounds.

And that’s it. Enjoy the ride!

Oh. It seems these directions were so long that you opted the taxi instead. Well, they are pretty cheap in Buenos Aires too, after all.

6 Comments To "How to catch the bus in Buenos Aires"

And before anybody asks the stock question – my favorite route is the number 29.

Lots of people go on and on about great bus routes from La Boca to Olivos. Well, of those, the 29 is the creme de la creme, taking you through San Telmo, past Plaza Dorrego, down historic Defensa, round the Chris Columbus statue behind the Pink House, past Plaza de Mayo with said Pink House, the Pyramid de Mayo, Cabildo and Cathedral, up the architectural wonder that is Diagonal Norte, past the Obelisk and over the widest avenue in the world, 9 de Julio, in sight of the Teatro Colon, through Tribunales, past the amazing waterworks building on Cordoba, skirting past Gardel’s hood of Abasto, past my apartment!,before entering Palermo Viejo, going past my girlfriend’s apartment!, into Plaza Italia and the parks, on to trendy Las Canitas, Belgrano and finally Olivos, near the presidential residences.

“ciertos reyes no viajan en camello” is a quote from a song by Patricio Rey, very popular rock band with plenty of “quotable” lines. Also it’s not an oddness to see in Argentina bus and truck drivers driving around taking any kind of message, religious, pagan, underground… Good site!

Thanks for the info and the nice comment Nico!

It’s good to know where the quote came from 🙂 I found a link to the song lyrics it is from here:

Whether or not it is common for bus/truck drivers in Argentina to have messages on the back of their vehicles, I still think this is a little odd….it is an oddball kind of joke, suggesting that kings like to travel by colectivo!

I just reviewed these tips in preparation for my first attempt manaña. I think I have it–the 110 goes from Recoleta to Palermo. If all else fails, I´ll catch a taxi.

Just got back. Your instructions worked flawlessly. We would have been lost without them.
Gracias

Excellent news…I thought my instructions were a bit long winded…so I am glad you were able to decipher them and get the colectivo OK.

The 110 is the bus I take from my new apartment to my my job in Flores…it goes there on its route after Palermo. It is certainly very quick between Recoleta and Palermo, I have noticed.

As I said in my other comment, I just sent you an email about the races.