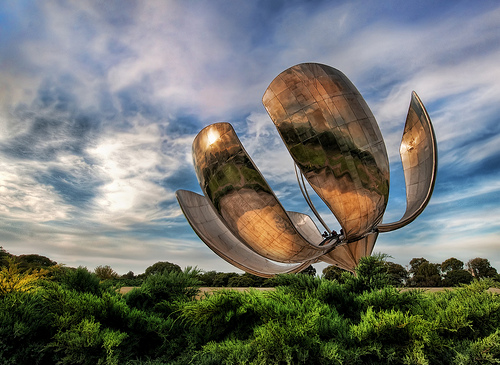 Stan Stalnaker’s website Hub Culture [1] has come up with a ‘2007 Zeitgeist Ranking’ for world cities, and our own Buenos Aires put in a respectable performance, sliding in at number 6.

“So hot! The Argentinian financial crisis has faded, but the incredible value of Argentina as a destination remains. This is fueling a buying boom in urban real estate as Europeans and North Americans establish summer homes and secondary residences here. Business remains slow, but BA is the hot spot of Latin America. Panama and Sao Paolo have heat, but BA sizzles. It’s the hottest “second city” in the world.”

The idea that a lot of rich North Americans and Europeans are buying property in BA because it is cheap to do so is not exactly something that makes for a cultural center, but the ranking speaks for itself. It is more likely that the slightly less well off natives and skint expats are using their creativity to make Buenos Aires a ‘hot cultural center’. Etiher way, getting this kind of ‘award’ has to be good PR for Buenos Aires, and is therefore not to be sniffed at.

Center of the Cultural Universe?

To get a little more idea about why Buenos Aires placed where it did, it is worth it to listen Stalnaker, the man behind the list:

“The idea behind the hub ranking is that at certain times in certain places, there is a veritable ‘center of the universe’ – a place where innovation, change and vibe combine to create the place of the moment. “The rankings are not about overt power or coolness, but that certain something that makes a place hot, on the verge, and really the place to be right now. It’s the place that later, everyone wishes they were at“.

That sounds a little better.

For a more concrete idea of why Buenos Aires is seen as hot right now, this Newsweek article provides an interesting picture of BA: The Capital of Cool [2].

And readers, what do you think makes Buenos Aires such a ‘hot cultural destination’? Please feel free to comment below…

Hi Alan, Buenos Aires has been a cool and artistic city for years, even decades. Foreigners just weren’t here to enjoy it! 😉
I wrote my post about my perfect day in Palermo Viejo. Hope you like it. Saludos!

[…] Robert Wright saunters to the 70-block Chacarita Cemetery in Buenos Aires – “the capital of cool” – and finds an architectural surprise. David Sasaki […]

Alejandro and Dalila – I agree, as I said in the above post, the culture here is obviously more to do with the natives than anything else 🙂

Thanks for the perfect day post Dalila – looks great, I will link to it in my next BA blog roundup post….which I am late with this time…

Hi Alan,
I just want to thank you very much for spreading the word about our city.
As for the culture, as someone said above, it’s always been here.
I’d dare to say that there were times when it was even stronger and better, but unfortunately, there weren’t many visitors…
I’m glad that the cheap peso attracted many people that otherwise would have never reach this shore.
And I hope that once BA is no longer the bargain it is right now, at least those visitors will keep on remembering us and telling others about the good time they had here…
Saludos!
Luis

well, intersting to see how so many folks have “discover” Buenos Aires, obviously our city is so far from USA and Europe. I really hope that permanent visitor residing there get acculturate with our traditions and idiosyncracy. Buenos Aires is cool not just now it has been cool for ever.
Mi Buenos Aires querido!!!!!!