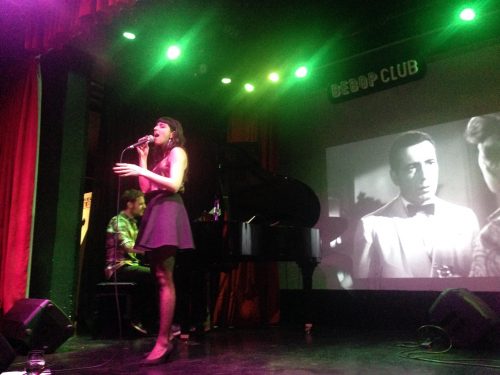 A BA newcomer with a New York twist

In the basement of the upscale Moreno Hotel [1], just two blocks from the historic Plaza De Mayo, couples cozy up and wait for the start of the nightly 9 o’clock show on a chilly August evening.

On the menu: expertly-crafted signature cocktails, picada plates overflowing with that famous porteño assortment of smoked meats and cheeses, and a quartet of world-class musicians headlined by the even smokier vocals of Luciana Morelli [2].

The newest venue to join the small but thriving jazz scene in BA, Bebop Club opened its doors in March 2014, just a few months after the death of the city’s first and most iconic jazz promoter, Jorge “Negro” González.  With his passing came the subsequent closure [3] of his downtown institution “Jazz & Pop,” removing the oldest contender in the BA jazz club lineup.

It’s hard to ignore the feeling that it was a passing of the baton. 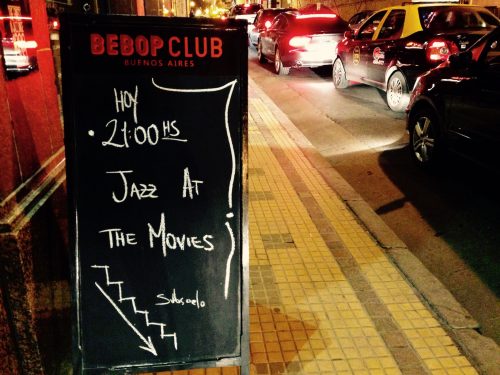 Springing up not far from González’ pioneering joint, Bebop is now the only place where you can take in a serious night of jazz East of 9 de Julio.  This is very good news indeed for the many visitors to the city who will choose to stay in the downtown [4] area, and not just because of the proximity— hotspots Notorious [5], Virasoro Bar [6], and reigning king Thelonius [7] in the trendy Palermo [8] district are quite a bit harder on the wallet.

Which is not to say that Bebop is a bargain.  A visit there will set you back about as much as an upscale dining experience— but one that leaves you full, happy, and convinced you got a good value for the money.  So the question remains: does this up-and-comer, which bears a Blue Note seal of approval outside its front door, live up to its self-stated mission to “simulate the experience of a NY jazz club”?

As a native New Yorker and someone who has taken in shows at both NYC’s Blue Note and New Orleans’ historic Preservation Hall, I would argue that it succeeds where it counts: in the caliber of the musicians, and the ability to leave an indelible imprint of the experience.

The small crowd size on this mid-week winter night didn’t befit the massive talent on display at the hands of Morelli and her crew.  If perfectly-controlled crooning backed by world class ivory-tickling in an impossibly elegant space is how Bebop celebrates a “slow night,” their bar for entry is high, indeed.

And not just for their musicians.  Bebop’s interior designer has painstakingly replicated the Blue Note’s detailing, and then surpassed it.  You’ll find the same signature half-moon, velvet-lined chairs, but adorning separate, circular tables rather than boxy, adjoined ones.

The stage is kept low, but the floor is smartly raised toward the back for a better view.  The stage is exquisitely in proportion with the room such that the side-dwellers aren’t too far out in left or right field— something the cuddling couples on the plush couches lining the walls will appreciate, and the clubs of New York can’t quite replicate.

Taken together— the lush lounge seating, the shared picada plates designed to “accidentally” tangle up lover’s fingers, and the romance that only a carefully curated array of world-class musicians can muster— Bebop could easily claim to be the best jazz venue [9] in the city for a date. Combined with a pre-show dinner at Aldo’s lavish wine bar and restaurant [10] upstairs, this one-two punch is sure to impress. 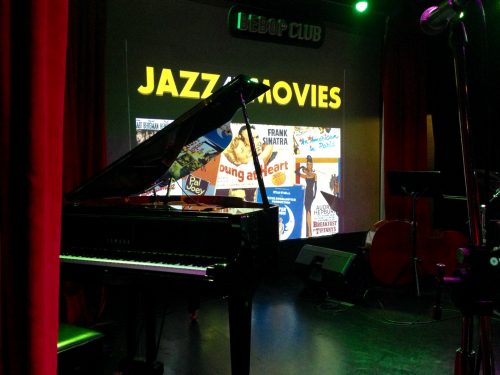 As for the fidelity to the New York facsimile?  To echo and expand on what has already been stated, Bebop succeeds where it counts— and fails where it shouldn’t try.  By striving to provide the “NY experience,” Bebop, and all other BA hopefuls, misstep. Yes, every good artist must imitate before they find their own voice, but Buenos Aires has already crossed that threshold, and is now failing to claim its own artistic merit.

To wit, Argentina has produced international jazz icons like swing guitarist extraordinaire Oscar Alemán [11], master pianist Lalo Schifrin [12], and free jazz pioneer Leandro “Gato” Barbieri [13].  Their version of the genre has unique roots in the tango orchestras being the first purveyors of its sound [14], layering on a distinct flavor and giving birth to the important sub genre of Latin jazz.

They even have the great underdog story [15] of overcoming fierce repression, first from a public who decided it threatened their tango [16] music heritage, and then from a dictatorship who banned it for being “imported” music.

Given that the scene only started to revive in the early 2000’s, it should be a mark of pride that Buenos Aires boasts a solid half dozen serious venues and no less than seven yearly jazz festivals. And, although Bebop won’t be a host venue this year in the largest of these— the Festival Internacional de Jazz [17], held each November— we have a feeling that will soon change.  Because regularly playing host to local legends like Art Zaldivar (see video below), Delfina Oliver [18], Luis Salinas [19], Jorge Navarro [20], and Manuel Fraga [21] can’t keep them off the radar forever.

So go enjoy a trago (drink) and the buena onda (good vibes) of an unforgettable evening of jazz, perhaps after a lazy Sunday stroll through the nearby San Telmo Feria [22]— and tell them this Yankee sent you.

Address: Moreno 364 (part of the Moreno Hotel), between Defensa and Balcarce

Tickets: Purchase online [23] to reserve specific tables, at the venue between 3:00 and 8:00 pm on show day, or directly before the show for best available.

Arrivals: 30 minutes before show start is recommended with no reservation