Crossing the diques (docks) to Buenos Aires’s elite district of Puerto Madero [1], you’ll undoubtedly spot one of BA’s most iconic structures: El Puente de La Mujer, or Woman’s Bridge. A beacon to all pedestrians, this elegant and sophisticated homage to women is one of the city’s most contemporary structures, curving over the waters of the Rio de la Plata [2]. 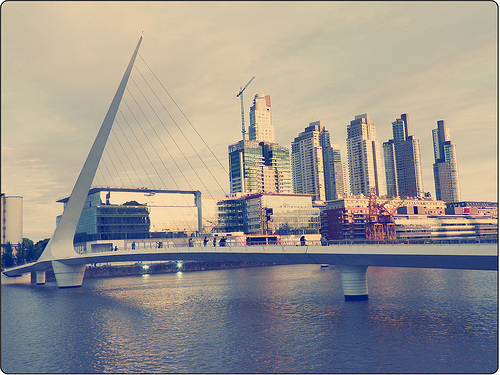 The bridge was designed by Spanish architect Santiago Calatrava, a pioneer of the Cantilever spar cable-stayed bridge [5]. Open for pedestrian passage only, it was completed in 2001. You may (like I have) spend hours contemplating the angles and shape of the bridge, wondering which parts correspond to a literal representation of a woman or if it’s simply a conceptual nod to womanly grace and elegance. But actually it was named as such because the streets of Puerto Madero are all named for famous and important Argentine women; the architect likens the structure to the synthesis of a couple dancing tango [6] (aha, now I see it!). 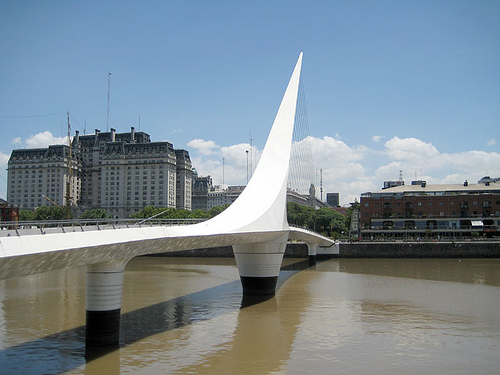 Puerto Madero is one of the only places in the city where you can see and enjoy the river. So head down to the restored docks on a beautiful day [9], and experience the bridge for yourself! If you’d like to see how it opens, you could wait around until a ship shows up, but that could be a long while (Puerto Madero is not the city’s functioning port, see below); why not just watch a video of the bridge open [10]! It is particularly lovely all lit up at night, or on a windy day, with the brackish river water rippling below. 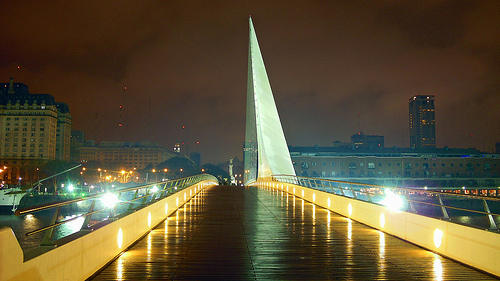 Puerto Madero: from rags to riches

Because the Rio de la Plata river [2] is so shallow, docking cargo ships was a challenge in the old days. Boats used to stop off shore and small crafts would bring passengers closer in, where high-wheeled carriages (or in some cases, slaves) carried passengers ashore. Puerto Madero was finally constructed as the port of the city, commissioned by Eduardo Madero in 1887. It was soon made obsolete, however, by the construction of the New Port (further North, on the waterfront beside the Retiro [12] neighborhood) in 1926. From this point on, the region fell into decay and became one of the most derelict sectors of the city.

In the 1990’s, however, the city and national governments joined forces, attracting major local and foreign investment, to revamp the old port into Buenos Aires’s most chic and elite neighborhood. Old warehouses were converted into smart offices, lofts, restaurants, and the new space for the private Catholic university, Pontificia Universidad Catolica de Argentina [13].

If it’s a hot day in Buenos Aires, this neighborhood is blessed with a revitalizing breeze. The docks are great for strolling [15], biking, or sightseeing; keep your eyes open for a crazy guy on roller blades, who skates up and down the block razzing tourists and making jokes. Next head into the Puerto Madero neighborhood itself, and saunter among the towers that house Argentina’s wealthy. Sip a luxury cocktail at the Faena Hotel + Universe [16] before exploring one of our favorite regions of the city, the Costanera Sur Ecological Reserve [17].

Read more about the history of Puerto Madero’s development [18] on Wander Argentina, or check out some of the most beautiful pedestrian bridges in the world [19] as rated by Travel + Leisure.