Grab a buddy and head to El Federal, one of Buenos Aires’ most beautiful and classic cafes (in operation since 1864), for a relaxing afternoon coffee, lunch, or dinner. It’s a pleasure to sit in this café [2] and admire the vintage ads decorating the walls, under a glow of soft lights. Bar El Federal is a perfect example of how the city has made an effort to preserve its cultural patrimony by maintaining old establishments in good condition.

El Federal also has a beautiful lowered bar (giving you the strange perspective of looking down on the bar staff) with an amazing carved wood and stained glass arching mantel above (see photos later in this post), an open kitchen which you can sneak a glance into if you sit in the back, two rooms full of sturdy wooden tables, and even a quaint little bookstore hidden within [3]. The crowd is a mix of porteños relaxing with friends and family, tourists with their heads buried in Lonely Planet guide books, and eclectic San Telmo [4] ‘locals’ from all over the world.

A classic café with cuisine that suits all tastes

Sit down at one of the tables and eventually a waiter in a crisp white shirt and black pants will bring you a menu longer and denser than a Borges [5] novel. Whatever your appetite is calling for, Bar El Federal has it, and it will be prepared with fresh, simple ingredients. In general, their offerings fall into the category of cocina porteña: Italian favorites such as fresh homemade agnolottis, spaghettis and raviolis topped with tomato, pesto, or cream sauces; pizzetas with any imaginable toppings, milanesas, hamburgers, omelettes, and sandwiches. 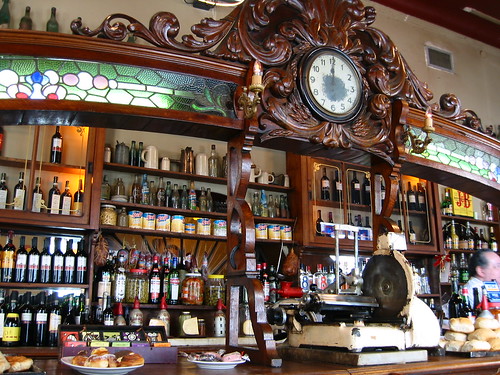 Elaborating on the topic of sandwiches, this cafe tops the charts in the vast quantity and variety of sandwiches you can choose from. There’s even an entire half-page in the menu dedicated to turkey sandwiches, which is not really common in Buenos Aires [7], as it is rare and very expensive. Then there are the medialunas rellenas, which are croissant sandwiches filled with cheese, ham, and other ingredients. They have traviatas, a sandwich made with crackers instead of bread, for a lighter option. You can choose from classic sandwich ingredients such as ham, cheese, salami, steak, sausage, hearts of palm, and more.

Worth mentioning are the picadas, large plates of finger foods that are served with bread baskets and make a wonderful light but satisfying dinner with some wine. El Federal offers some especially creative selections, such as sautéed eggplant, fried raviolis, peanuts, walnuts, olives, ham, cheese cubes, and goat cheese. The picadas are a great choice if you aren’t in the mood for a hot meal, and they are ideal for eating slowly during great conversation or romantic whispers with your date.

El Federal serves fresh homemade Spanish tortillas, and their salads are also notable, which range from specialties such as apples, carrots, walnuts and cheeses to traditional favorites with a lettuce and tomato foundation. The main theme here is fresh and simple, so don’t expect fancy bistro salads, but you will not be disappointed with the quality.

Have a coffee, bottle of wine, cocktail, or milkshake

As for quenching your thirst, El Federal is like a bottomless well. You can sip on unique cocktails like a pisco sour, caipirinha, or the classic Negroni – a mix of gin, Campari and vermouth, with a slice of lemon – guzzle handcrafted Argentine beers by the bottle, partake in pitchers of draught beer or cider, or just linger over carafes of Argentine wine. Order like a local by asking for a chopp de sidra (a mug of traditional Argentine cider, on draught). Or you could even go all out and order a bottle of champagne, which is surprisingly affordable at El Federal.

Most of the alcoholic beverages are modestly priced, and as always in Argentina [8], wine is the best deal you can get if you don’t want to spend a lot. El Federal offers trusty, economic wines such as Traful, Lopez, and Concha y Toro.

If you are looking for something that won’t get you tipsy, try a classic espresso-based drink such as café con crema, or a tea. And El Federal features licuados, the Argentine version of smoothies and milkshakes, which are made with either water or milk, according to your taste, and consist of any combination of fruits.

If you want a real dessert, Bar El Federal will not disappoint: it also has an extensive list of sweet concoctions, including strudels, pastries, and European-inspired creations of chocolate and fruits. Especially mouth-watering is the apple, pear, and cinnamon strudel, which is baked nearby and brought in fresh daily.

The service at El Federal is relatively slow, but it’s not the kind of place where you’ll want to rush through a meal or drinks. Enjoy the old-fashioned setting and the background noise of the kitchen sizzling meats and forks clinking on plates, while you experience the laid back lifestyle that Buenos Aires is so famous for. 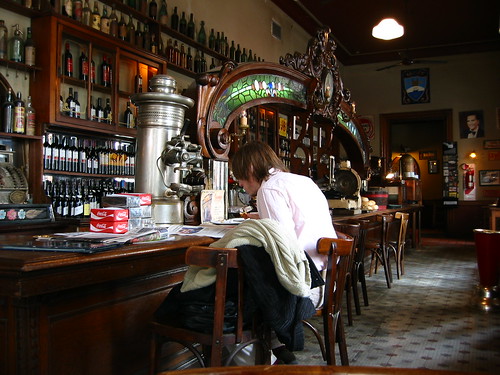 Ahhhh! Reminds me of my last visit in Buenos Aires about 5 years back. I miss the relaxed and laid-back atmosphere.

Time to book a flight again….

Thanks for the comment… nice blog you have – congrats on escaping the rat race!

Must be pretty relaxed and laid-back in Bali too though?

When I went there last week I was first struck (after the gorgeous antique bar and interior) with the wooden menu, which is exactly the same as Cafe Margot in my neighborhood of Boedo. Sure enough–they are a set of historical cafes owned by the same people. It was sorta like deja vu, but a pleasant one, because Cafe Margot is one of my favorite hangouts.

[…] it was time for lunch, so we walked to Bar El Federal. It was tight quarters inside, but we had a good meal and enjoyed the […]