Pizza is a serious business in Buenos Aires

“Today a lot of places make Pizza. We created it…”

Buenos Aires was largely built on huge amounts of European immigration around the turn of the 20th century, with the large majority coming from Italy, not Spain, as many would believe (they came in second). In fact, according to a Yale essay on Argentine Immigration [1]:

“Between 1857 and 1958 the main source of immigrants to Argentina were Italy and Spain accounting for 46 and 33 percent, respectively, of the total. The rest of the immigrants were made up of different nationalities, including French, German, British, and Irish.” This amounted to almost 3 million Italians in that period, most of which arrived in the massive rush between 1880-1916.

The Italians and La Boca

Most of the Italians arrived into the port of La Boca [2], and they liked it so much, they stayed there. La Boca has since then been the main Italian community in Buenos Aires. In fact, the famous football team that plays here, Boca Juniors [3], is known affectionately as the “Xeneizes,” which means “the Genoese” (people of Genoa, Italy), in an old Genoese dialect.

What do Italians love to eat? Pizza, pasta and ice cream. All of which, of course, are abundantly available throughout Buenos Aires… some of it, arguably (and controversially), better than back in the homeland. And where better to sample Italian food in Buenos Aires, than in the main Italian community here, La Boca…

The history of Banchero Pizza 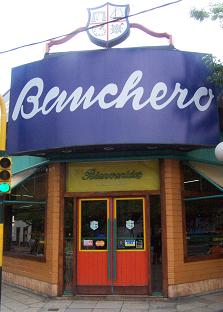 Don Agustin Banchero arrived from Genoa to Buenos Aires in 1893, to try his luck in Argentina. He soon became one of the first people to sell Pizza in Buenos Aires, starting a little bakery with his son Juan in calle Olivarria, where the “Fugazza Con Queso” was born! (Fugazza was a Genoese invention of a sauceless pizza topped with caramelized onions, oregano and seasoning. It tastes nicer than it sounds. Banchero added the cheese, and this version is now more widely known as the Fugazzetta).

This was surely one of the defining moments in Argentine culinary history. Pizza is that important here.

Son of a Pizza maker

Agustin’s son, the Don Juan of the Argentine Pizza world (literally, that’s his name, Don Juan Banchero), soon took over the dough mantle from his father, and on 28th March 1932 opened the traditional Pizzeria Banchero here in La Boca, which he ran with his sons Tito and Antonio.

It is still in the Banchero family, but has since ‘branched out’, adding three other locations, including a branch near the Obelisk on Av. Corrientes 1300.

But what about the Pizza?

Well, the Pizza is great. Deep dish, with loads of gooey mozzarella cheese. Pictured below is a ‘Chica Calabresa’, which is an individual sized Pizza topped with lots of mozzarella, tomato sauce, tomatoes, slices of calabresa sausage (a bit like Argentine chorizo sausage, only a little spicy, and interestingly with a faint hint of aniseed to it) and green olives. 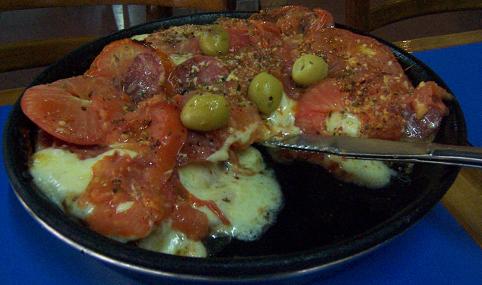 There are also cheaper options if you are with company, for example the Grande Muzzarella, will be more than enough for two people. Throw in a couple of slices of Faina, a chickpea based pie that is eaten on top of a slice of Pizza here in BA, and you are set.

And the restaurant [4] itself…? Always deserted.

It’s true that most of La Boca has a sad, run-down, ghost-town quality to it these days, aside from the small touristy area around Caminito, as a result of there being very little work on offer in this area. Banchero adds to the deserted feeling; it’s like walking into a restaurant in a seaside resort during off season – and you wonder how, or why, they are still open. Maybe it’s because they feel they have a duty to continue the family tradition of providing the highest quality Pizza to the Argentine public. Or, less romantically, maybe the city center branch is where the profits are made, with the La Boca location kept on for authenticity’s sake.

All in all, Banchero is a great place for some top quality Pizza in Buenos Aires.

you also have Güerrín very close to the Corrientes’s Banchero and I consider it is way better than Banchero. I recommend you get there when you get the chance: it has reminded me so many times before why I live here.
Amazing blog!

I love Banchero!!! and I`m sorry but I couldn`t read all your long post, you convince me to go in the first paragraph. Anyway, you are a good boy for telling us all the story.

Hey Tristan! Thanks a lot for the comment, but hey, you spoiled one of my next posts! 😉

See the part at the end of my post:

“It (Banchero) is one of my favorite Pizzerias, but not out and out my favorite – I can think of at least two others that probably edge it for that crown, which I will of course be reviewing sometime soon.”

Well, of course one of the others I was talking about and am going to review very soon is Güerrín, which is definitely a much better option that Banchero if you are on Corrientes. In fact, it is my favorite Pizzeria in the city.

And thanks again very much for the really nice comment about my blog!

Diva, thanks, and yeah, I do write WAY TOO MUCH, it’s something I’m going to change soon with shorter, snappier posts…I just get a little carried away!

[…] So I won’t.  Instead, I’ll let Alan Patrick of BuenosTours tell you.  Alan is a cake-a-holic philosopher turned Buenos Aires tour-guide and blogger, which puts him in a perfect position to tell you about the history of Italian food in Argentina, and also about one of the best pizzerias to be found in Buenos Aires. […]

Banchero Once is the Best Pizzeria on all Bs.As & Argentina too

A little expensive, but in comparition betwen other pizza´s places in Capital Federal is a little cheap.

Hi Hemo,
I haven’t tried out the Banchero in Once, yet, but sometime I will surely get around to it and see the difference between it and the original branch.

And thanks for the Pizza enthusiam!

[…] pizza place that claims to have invented the famous fugazza and fugazzetta slices. According to BuenosAiresTours.com, a man named Don Agustin Banchero arrived in Buenos Aires more than 100 years ago and became one of […]

[…] but also the sense of connection to the local culture that comes with it. Being able to enjoy a Banchero pizza every other Saturday night, or a Sunday breakfast with La Buenos Aires pastries every now and then […]