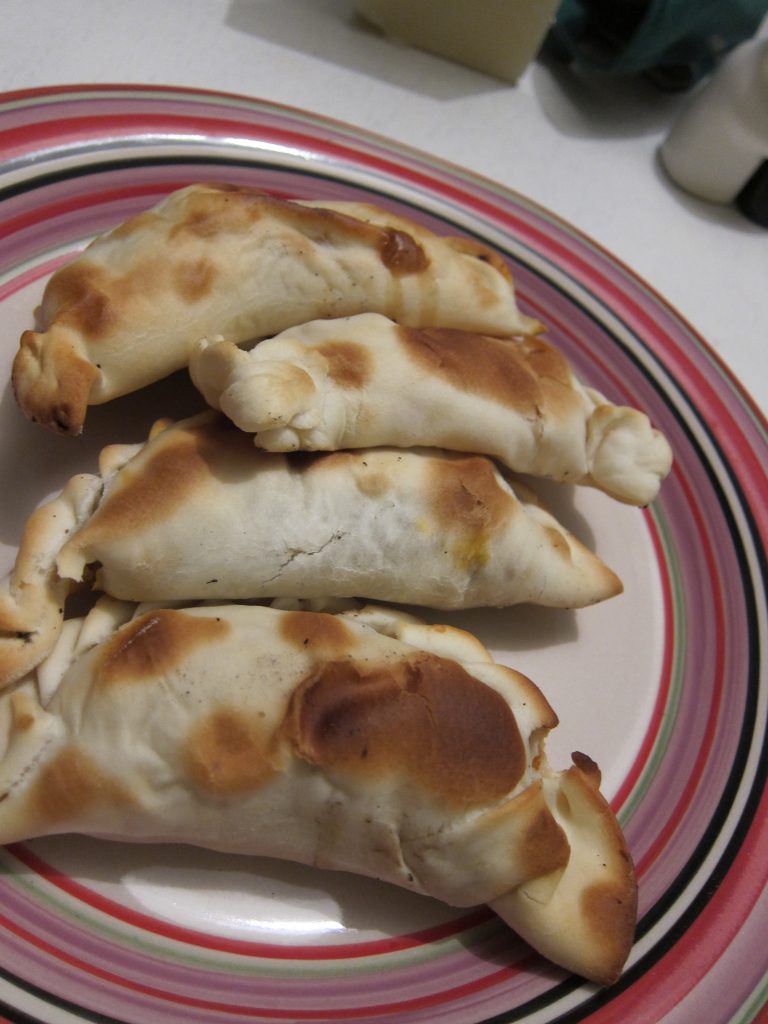 Empanadas (literally meaning wrapped in bread) are savory pastry pockets, filled with a variety of delicious stuffings.  As common as asado [1], pizza [2], pasta, or alfajores, empanadas are a mainstay in the Argentine diet.  Oven baked (al horno) or deep fried (frito), they are served warm at parties and dinners alike and porteños frequently order empanadas via delivery, just as they might pizza.

Common Argentine empanadas and what to expect inside

In almost every restaurant that serves local fare, you can find at least three kinds of empanada on the menu.  Here are the most typical kinds,  typically named based on their fillings…

These are most of the common empanadas, but chefs are known to create interesting combinations all the time.  Keep your eyes peeled for blue cheese, celery and walnut (roquefort, apio, y nuez); or pancetta and plum (panceta y ciruela). 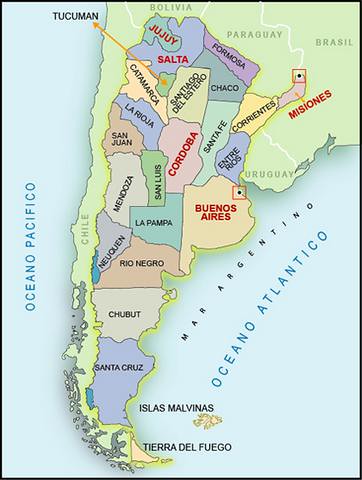 There are some regional differences in empanadas from various provinces of the country, from size to preparation to ingredients.

Empanadas salteñas from the Northern regions of Salta and Jujuy are filled with meat, potato, boiled egg, and chives.   Sometimes, they’re even made with llama meat!  They can be found farther north in Peru and Bolivia, known simply as Salteñas.  Many attribute their diffusion to Juana Manuela Gorriti [6], a woman writer from Salta who fled with her family to Bolivia during the Rosas regime in the mid-1800’s.

The story goes that she and her mother sold empanadas to survive in their early days of exile, though this is perhaps doubtful since she came from a family of high status, and went on to marry the President of Bolivia.  She eventually moved to Peru where she met with other important Latin American writers of her day and became an intellectual figure of her time.  The women of these nations still follow her culinary lead, but while the empanadas are universally called Salteñas, they are often quite different from the Argentine version.

Empanadas catamarqueñas or riojanas from the provinces of Catamarca and La Rioja are very garlicky, and usually made with goat meat.  From Córdoba, empanadas cordobesas are known to be sweet, since they come sprinkled with sugar and stuffed with raisins.  Empanadas sanjuaninas are probably so delectable because they’re prepared with lard; they also come with a whole olive in each empanada (watch out for the pit!) and are cooked in traditional wood ovens.  To try these out, El Sanjuanino [7] on Sanchez de Bustamante and Santa Fe (and other locations) comes highly recommended.

In the subtropical regions of Corrientes and Misiones, empanada dough is made from cassava root [8] flour, and it’s common to find exotic fillings like surubí or manduvé, two species of catfish; pacú, a relative of the pirana; or golden dorado.  In Entre Ríos, there is an empanada filled with arroz con leche, a rice pudding.

In the provinces of Patagonia (Neuquén, Río Negro, Chubut, Santa Cruz, and Tierra del Fuego), the empanadas are most commonly filled with lamb, guanaco or fish and shellfish, especially mussels or even Southern King Crab [9] (known as centolla).  Empanadas from these regions are prepared with white wine, making for a juicy filling and a thicker dough.

The people of Tucumán love empanadas so much, that every September they hold the National Empanada Festival.  They are quite traditional, sticking to only three kinds of empanada: matambre (rolled flank steak), chicken, and tripe!

There’s an interesting Argentine saying, “todo bicho que camina va a parar al asador”, which means any creature that walks will end up on the grill.  Empanadas are no exception to this rule, and any meat available is fair game.  That means armadillo, vizcacha [10], yacare caiman [11], carpincho or capybara [12] rodent, and rhea [13] can all be found rolled up in a turnover, somewhere.  But don’t worry, they (probably) won’t be served in a restaurant!

Making empanadas is fun and you can stuff them with whatever tempts your taste buds!  The easiest route is to pick up some of the pre-made dough at the supermarket, then make your own filling.  But if you’re feeling really up to the challenge, try this recipe!

1.   Put all the flour into a big mixing bowl and form a crater in the center.  In a separate container, mix warm water with the butter and salt.  Pour the liquid mix into the center of the crater.

2.  Mix well, then knead until uniform.  Allow the dough to rest for at least 15-20 minutes in the refrigerator.  If you have the time, let it rest overnight.

3.  Flour your surface, then roll the dough a bit thicker than 1/4 inch.  Cut circles about the size of your hand from the dough.  Now you’re ready to fill the empanadas!

1. Finely dice the onions while allowing enough oil to cover the onions heat in a medium to large saucepan.  When the oil is hot, add the onions and allow to saute until they are clear in color.

2. Add the meat and spices, and cook, stirring frequently.  Once the meat is cooked, remove the mixture from the heat.

3. Hard-boil two eggs.   While these are boiling, slice the olives however you like: or just leave them whole, but remember to remind the guests to watch out for pits!

4. Once the eggs are ready, slice them and add to the meat mixture.  If you have diced the olives, add those too.

TIP: If you’re very hungry, just allow the filling to cool before you stuff your empanadas.  But most Argentines actually let this mixture sit in the refrigerator for a day (or two…) before baking.  This helps the mix become uniform.

That’s my boyfriend’s brother, Claudio.  He gave up on folding empanadas after one try.  Don’t be like Claudio!  If you can’t manage any folds, try closing the seams with a fork.  Just make sure everything is tightly sealed, that way no juices spill out while cooking!  Fortunately, his mom and neighbor whizzed through the empanada preparation, and here’s a good example of the fold, below:

If you’d like to make a traditional, vegetarian, humita empanada, try this recipe on the Seashells and Sunflowers blog [15].  For recommendations about where to find regional empanadas in the city, try Saltshaker [16], and don’t miss our review of Cumana Empanadas [17]. Happy pastry sampling!

[…] meat, cheese, vegetables or even a tuna filling. There is entire universe of empanadas, you check here more info and […]