Later today (Sunday July 15th, 2007), Argentina will take on Brazil in the final of the Copa America – the most important national football (that’s soccer, to all you Yanquis) team tournament in the Americas (team news here [1]). As you might have guessed, there is something of a futbol rivalry between Argentina and Brazil. In fact, in the past things have got so heated that the two countries have even resorted to humorous advert warfare…

Back in 2004, Brazil beat Argentina 3 – 1 [2] in a World Cup qualifier, and shortly after, Tulipan, an Argentine condom manufacturer that puts out consistently funny [3] and clever [4] ad campaigns, came out with this provocative billboard of typographical genius: 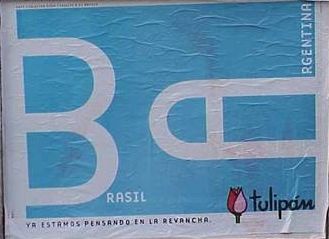 I don’t think I need to spell out exactly what Tulipan claimed Argentina would do to Brazil in their next match!

Not to be outdone, neither on the pitch nor in creative use of typography, the Brazilian football organization responded with the following ad: 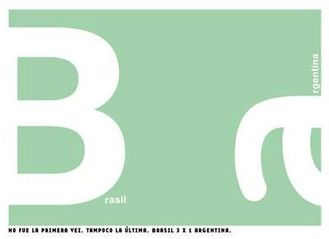 “IT WASN’T THE FIRST TIME. AND IT WON’T BE THE LAST”
(No fue la primera vez. Tampoco la ultima)

Anyway, Argentina have been playing great football pretty much throughout the Copa America (check out Messi’s fantastic goal against Mexico in the video below), so let’s just hope they can keep it up (ahem) this time against Brazil in the final.